Two forms of cooperation involving multiple agents will be subject of discussion: “biological markets” and “social dilemmas”. Biological markets are characterised by pairs of agents that form through partner choice in order to engage in short-term or long-term cooperative interactions. The possibility of partner switching causes an adaptation of exchange rates of goods and services according to supply and demand. “Social dilemmas” include phenomena such as public goods dilemmas, collective action problems and tragedies-of-the-commons. All these terms refer to forms of cooperation in which multiple partners simultaneously cooperate to attain a common goal. The “dilemma” is due to the fact that in many of such situations an individual can gain immediate profit by cooperating less, which leads to a conflict between private and public interests.

The theoretical and empirical developments in these two complex forms of cooperation have hitherto been largely independent. One of the main goals of the workshop is to connect the two. The success of partner choice theory, of which biological market theory is an example, compared to partner control theory, best known from models based on the two-player Iterated Prisoner’s Dilemma, makes clear that a switch of emphasis from partner control to partner choice is necessary to properly understand most instances of dyadic cooperation. In the ‘social dilemma’ world the emphasis is still largely on the role various partner control mechanisms, such as reputation, indirect reciprocity, (altruistic) punishment, strong reciprocity and leadership, play in stabilising cooperation. There is little doubt that all these mechanisms play an important role, but has the impact of partner choice been overlooked? Does partner choice result in better coordinated and more successful teams? Is team formation democratic or despotic? Are members and leaders of teams chosen based on their reputation?

Our workshop will focus on both human and nonhuman cooperation and therefore anthropologists, economists, political scientists, psychologists and sociologists, as well as biologists have been invited. We will look at the evolution and maintenance of cooperation among humans (groups, teams, tribes, businesses, nation states), within and between non-human species (bacteria, amoebas, fungi, plants, invertebrates and vertebrates) and among non-living entities (robots, cellular automata). We will attempt to identify common denominators underlying these very diverse forms of cooperation as a first step in the development of general models that have validity across boundaries between human –and non-human; living and non-living. 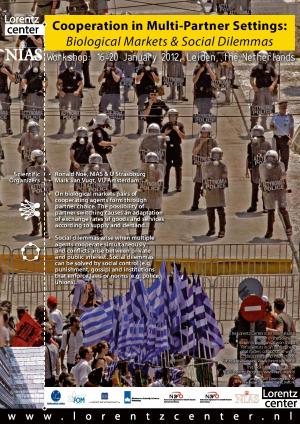