During the development of an embryo, one cell changes into a complex organism consisting of many organs and tissue with specific shape and function. Early work on this topic focused in the 19th century on the visible changes in the embryo. At that time, scientists investigated the forces involved in this process as well, thereby studying the biomechanics of morphogenesis. However, since the genetic revolution in the 20th century, most research focused on gene expression patterns leading to embryonic development. Only recently, the idea that biomechanics could play a role in morphogenesis via self-organization has re-emerged. During self-organisation, patterns form due to the characteristics of lower level elements, such as cells, without control from a higher level. Investigators have now started to expand molecular models of morphogenesis with biomechanics to reach a more complete view.

Mechanics likely plays a role at all scales of morphogenesis. At the tissue scale, collective cell movements are driven by forces generated by the cells themselves, by adjacent cells and strains and stresses transduced by the extracellular matrix. At the cellular scale, cells can deform their extracellular matrix via contraction and growth. At the molecular scale, receptors and cytoskeletal elements sense and process mechanical cues.

This workshop will discuss the biomechanics of morphogenesis in the context of a specific case: the formation of body segments and vertebrae in the process called somitogenesis. Early in development, the axis of the vertebrate embryo is segmenting rhythmically into somites, the precursors for the segmental structures such as the vertebral column, ribs and skeletal muscles. This process of creating somites has fascinated developmental and theoretical biologists for over a century, due to its strict periodicity and well-coordinated morphogenesis.

Currently, the most favoured theory to explain the process of somitogenesis is the clock and wavefront model. According to this model, oscillating gene expression results in rhythmic transition from a mesenchymal to an epithelial phenotype in cells, leading to the formation of a new segment. Despite many studies into the molecules involved in this, the pacemaker of this molecular clock has not yet been identified. A missing link in this process, as described in recent literature, could be biomechanical interactions between cells and their surrounding matrix, such as fibronectin matrix and integrin clustering, reciprocal inhibition of integrin activation, Eph/Ephrin signalling, cell compaction, and convergence – extension movements. Therefore, it would be interesting to explore mechanics as a factor providing cues to the molecular clock of somitogenesis.

Our workshop will bring together developmental biologists, mathematicians, biochemists, engineers and physicists to

a)    define the state-of-the-art in the clock and wavefront model and its open questions,

b)    discuss the mechanical characteristics of the embryo during somitogenesis,

c)    explore the role of mechanics in somitogenesis, and its potential involvement in the regulation of the somatic clock. 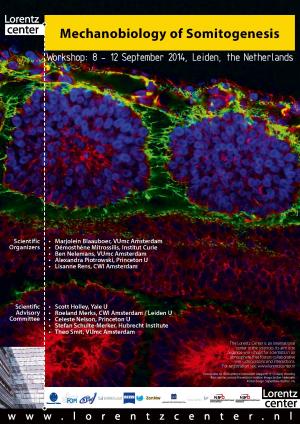 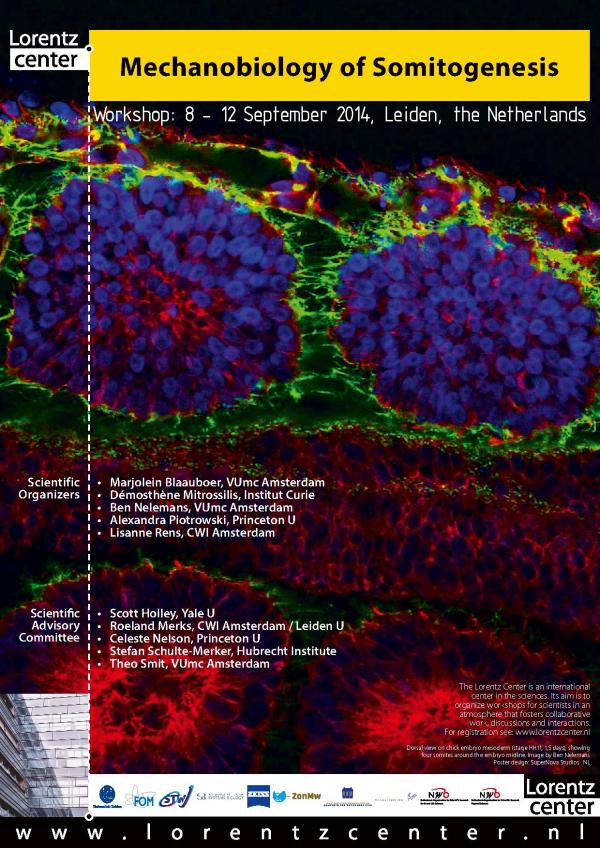