This workshop is part of a “Series of Events” in the Marie Curie Action SCF (Conferences and Training Courses) and co-sponsored by the EU’s 6th Framework Programme.

The focus of this workshop will be on the confluence of interdisciplinary research involving nonlinear cooperative behavior in complex systems. This is a broad research area with applications in many fields since cooperative behavior underlies much of the observed phenomena in nature. In physical, chemical and biological systems cooperative behavior often stems from diffusive coupling of nonlinear elements and reaction-diffusion equations provide the prototypical description of such systems. Cooperative phenomena leading to pattern formation in homogeneous reaction-diffusion media have been intensively studied for several decades. Significant progress has been made and we now understand spatiotemporal dynamics, such as traveling waves, stationary patterns, and space-time chaos, in terms of the cooperativity between diffusion and nonlinear chemical reactions.

Instead of surveying all aspects of the field of nonlinear cooperative behavior, the workshop will emphasize some of the most exciting and least well developed aspects of this topic: reaction-diffusion dynamics in heterogeneous media, the dynamics of networks and cooperative behavior and swarming in systems with self-propelled elements. One of the main aims of the workshop is to establish links between these areas and explore the common elements in approaches used to describe these systems.

Research on networks has been pursued very actively in the past few years, with advances in fundamental theory and diverse applications in areas such as social networks, power grids, and metabolic pathways. Most of these studies, however, have focused on the structure and topology of static networks. Interest is now shifting to networks of dynamical systems and dynamical networks. The most important applications of the dynamics studies lie in biochemical networks, especially at the cellular level, neuronal networks and disease spreading. Reaction-diffusion equations often provide a natural mathematical description of these dynamical networks since the elements of the networks are coupled through diffusion in many instances. There are limitations to the reaction-diffusion description. In biochemical networks in small cellular geometries a macroscopic reaction-diffusion model may be inappropriate. In some circumstances the coupling among elements is not diffusive and this will strongly influence the dynamical behavior of the network. The workshop will explore theses aspects of network dynamics.

The cooperative behavior of self-propelled elements is often observed in nature. Examples include natural swarms, such as flocks of birds and colonies of bacteria as well as man-made swarms, such as collections of autonomous drones. Other examples of self-propelled elements include motor proteins, which often act collectively, and chemically propelled nanomotors that can interact with each other through the fluid in which they move. Swarming also has become a very active research topic in complex system dynamics. While early work relied on rule-based behavior and interactions, more recent studies have focused on self-propelled agents interacting with one another according to specific forces. Swarming dynamics of chemical waves has been observed in reaction-diffusion media. Studies of swarming behavior, and more generally cooperative behavior of self-propelled agents, using particle-based and reaction-diffusion models will be explored and novel descriptions of in terms of dynamical networks will be discussed.

From the brief summary given above, it is clear that coupling between local nonlinear dynamics (generally referred to here as reaction) and diffusion forms the basis for the description of many aspects of networks and the cooperative behavior of self-propelled elements. The new key feature of the application of reaction-diffusion ideas to these systems is the heterogeneity of the medium. For example, the network elements may be domains in space where specific sequences of reactions take place. For this reason we intend to highlight recent research on reaction-diffusion dynamics in heterogeneous media. In this case some of the networks of interest are very familiar, such as cardiac tissue composed of cardiac cells, each cell having somewhat different characteristics so that wave propagation is altered. Model heterogeneous systems can be designed in the laboratory to study cooperative behavior under controlled conditions.

This workshop will bring together leading experts on these topics who will present the latest experimental and theoretical results in these fields. The formal discussions at the workshop will identify the common tools and phenomena in these apparently diverse systems in order to set the perspective for future work in the field. 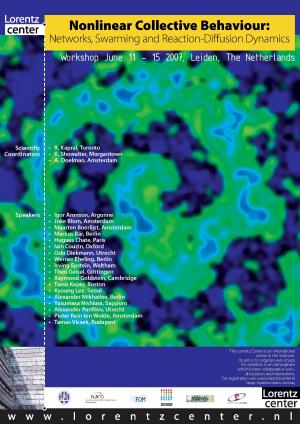 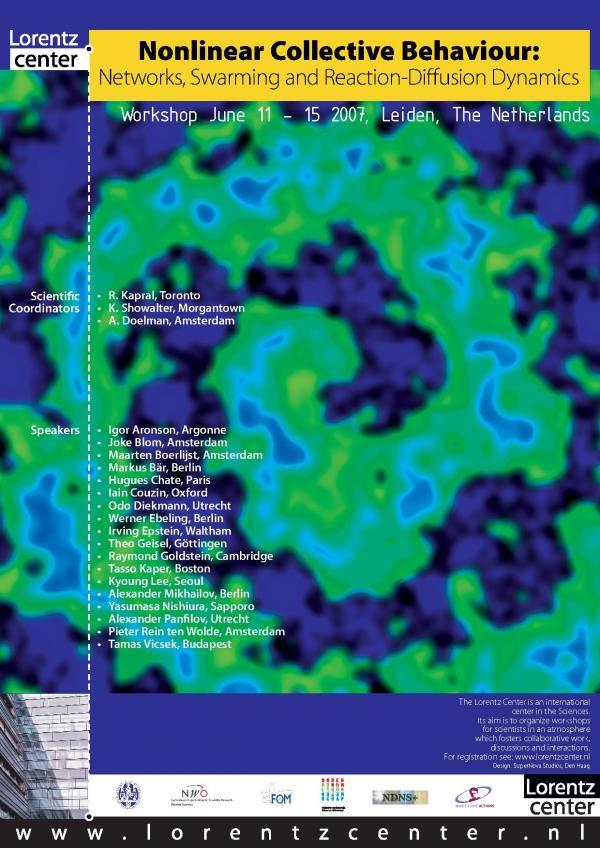