And then there was Light: Electromagnetic Signatures of Stellar Mass Binary Black Hole Mergers

The first detections of gravitational waves by the Laser Interferometer Gravitational-wave Observatory (LIGO) have truly opened a new window in the astrophysics of compact objects.  Major effort and resources have been devoted towards world-wide campaigns to search for electromagnetic (EM) counterparts across the spectrum from X-rays to radio bands.

For the merger of two black holes in vacuum, EM counterparts are generally considered unlikely.  However, recently several authors have speculated about various mechanisms to produce bright EM signals. EM signals could be produced when small amount of gas or non-degenerate objects are present at the merger site.  Examples include the merger of black holes occurring inside a dense gaseous disk in the nucleus of a galaxy, the possibility of residual or accreted gas present in a circumbinary disk or in mini disks around the black holes, or interaction of the merger product with another star or planet. There is no consensus at present on which of these propositions are realistic, and the proposed scenarios typically lack solid quantitative predictions that can be tested against observations.  However, one thing is clear: detections or non-detections will provide truly unique constraints on the progenitor channels and the post-merger dynamics.

During this workshop we hope to accelerate progress in this field by initiating interaction between theorists from different communities with key observers to consider the full range of possible electromagnetic signatures of binary black hole mergers.  The workshop aims are: (I) identify the most promising mechanisms for detectable EM signals and what we expect to learn from them, (II) construct a roadmap and prioritization for efforts needed on the side of theoretical simulations,  (III) identify the most promising observing strategies and (IV) enhance mutual understanding between theorists and observers in the community regarding the challenges and the most promising avenues for overcoming them. 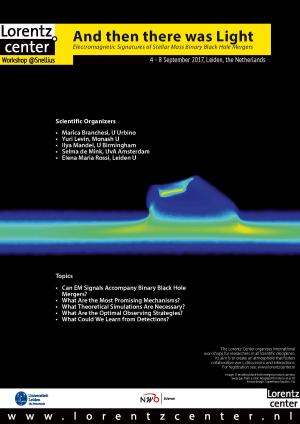