Baryogenesis and First Order Phase Transitions in the Early Universe

An important motivation for considering extensions of the Standard Model of Particle Physics (SM) is to provide an explanation for the Baryon Asymmetry of the Universe (BAU). Two particularly attractive mechanisms that offer plausible explanations for the BAU are electroweak baryogenesis (EWB) and leptogenesis. For a successful generation of the BAU, the SM needs to be extended by massive particles, and furthermore by new sources of charge-parity (CP) violation. The EWB scenario predicts the dynamical emergence of the BAU through the non-equilibrium and CP-violating dynamics of the early Universe at the electroweak scale, which is experimentally accessible at the Large Hadron Collider (LHC). Out-of-equilibrium and CP-violating conditions are generated dynamically, provided the electroweak phase transition is strongly first order, and bubbles of the broken symmetry phase nucleate. This requires the presence of mainly bosonic new particles with a mass in the range of 100-500 GeV. Leptogenesis relies on new sources of CP and lepton number violation through additional Majorana neutrinos.

This Workshop is timely, because key experimental results hinting at the origin of the BAU are anticipated in the near future. Firstly, the Large Hadron Collider (LHC) will soon uncover the mechanism for electroweak symmetry breaking and secondly, lowenergy searches for signals of CP violation beyond the Standard Model continue to gain in sensitivity. These advances call for an improved theoretical understanding of baryogenesis, which is reflected in the recent activity and progress of several groups in the field.

The following more particular topics will be addressed during the Workshop:

Electroweak Baryogenesis.– Out-of-equilibrium field theoretic description of EWB; impact of technical improvements on the prediction of the BAU; phenomenological links of EWB to signatures beyond the Standard Model, such as supersymmetric models, models with dynamical mass generation or models with extra dimensions;  (anticipated) results and improved bounds from the upcoming LHC experiments and of the searches for CPviolation in permanent electric dipole moments of electrons, atoms and nuclei; impact of these observations on baryon generation in different models.

Dynamics of First Order Phase Transitions.– Order of the electroweak phase transition, in particular in the light of new mass bounds or signatures of the Higgs boson from LHC and Tevatron; dynamics of a first order phase transition and its dependence on the mass spectrum of particles; bubble wall velocies; gravitiational wave signatures.

In summary, the proposed Workshop aims at bringing together the researchers in the field of EWB/leptogenesis at the time of the anticipated relevant experimental discoveries.

Our hope is to create an intellectually stimulating climate that will result in progress toward understanding the origin of the cosmic matter-antimatter asymmetry. 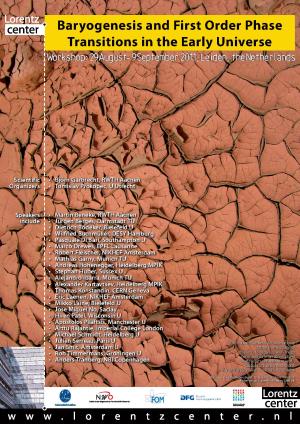 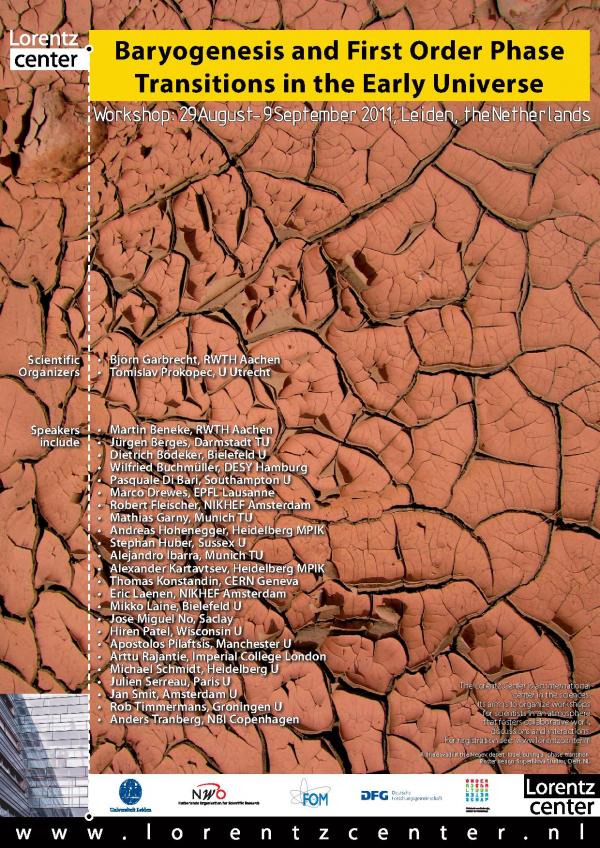