Efficient digestion and absorption in the gastrointestinal tract is fundamental for life and health. It has been recognized that many key issues in public health, such as obesity, adequate infant nutrition, food for the elderly, and at least some of the initiators of hypercholesterolemia, are related to a disfunctioning or disregulation of digestive and absorptive processes and inadequate food properties. Although much scientific effort is currently addressing the microbial processes in the large intestine, which through fermentation products of dietary fibers contributes mainly to colonic health and probably also to some aspect of food intake control, it is the small intestines that form the main site of digestion and absorption of almost all nutrients and vitamins, and also plays a main role in the removal of excess cholesterol from circulation. Small intestinal processes are however difficult to investigate. Whereas the microbial processes in the colon can be studied largely on fecal samples, the in vivo accessibility of the epithelial tissues and lumen in the small intestine is difficult. The complexity of the processes in the small intestine (enzymatic digestion, the role of bile, cellular process involved in absorption by the small intestinal mucosa, transfer of absorbed components to either blood or lymph and the biofeedback mechanisms that regulate the progress of digestion and absorption has resulted in a multitude of scientific disciplines that work more or less separately on partial aspects f the whole process (e.g. food emulsion technology, food physics, enzymology, medical, pharmacy , physiology, infant nutrition).  It is the purpose of this workshop to bring both experienced and less experienced researchers from these different disciplines together and to stimulate debates and discussions and to cross fertilize new-ideas and facilitate establishing new  cross disciplinary collaborations.

As the common subject for the participants, we choose the digestion and absorption of lipids as the focal topic; however via various presentation and round table discussion we will try to place it into the broader context of digestion and its various applications.

Focus on lipid digestion and absorption

The absorption of lipid components from food plays a central role in many health related issues. Triglyceride fat is a main nutritional component, and also the main source of essential fatty acids and fat soluble vitamins. The secretion of bile is regulated by the detection of fat in the small intestine. Bile not only is essential for activating the intestinal lipolytic enzymes but also for lipid absorption, by transporting the lipids through the mucous intestinal lining in the form of bile micelles. Bile secretion is moreover the main route for secretion of cholesterol from the blood. Fat is a potential stimulant of satiety and therefore plays an important role in controlling caloric intake; however, the efficacy of this control is strongly affected by the formulation. Separation of a creamed emulsion or oil layer in the stomach delays the release of fat from the stomach and the detection of fat in the small intestine, which leads to delayed satiation and promotes overeating during the meal. On the other hand, an enhanced satiety-inducing effect is expected when unabsorbed fat is detected in the lateral part of the small intestine, especially if the fat is then mainly in the form of free fatty acids. Saturated fatty acids can suppress the bioavalibility of calcium and magnesium by binding these important metal ions in the form of insoluble and unabsorbable soaps.

Because of the intricate involvement of fat absorption in health issues, much effort has been taken by the nutritional, physiological and food physical scientific communities to improve our understanding and to better control the processes involved.

Although  it is clear that the complex interaction of gastric pre-lipolysis, bile, and the mix of lipolytic enzymes and colipase can very effectively digest fats and make the lipolytic products and enzymes available for absorption, much has remained unclear. What is the effect of the composition of the droplet interface and interfacial rheology on the lipolytic activity and to what extend can food formulation, e.g. different emulsifiers or triglyceride encapsulation be used to control fat digestion and through this be used to reduce food intake in the obese or increase food intake in diseased and elderly? How fat digestion is affected by physiological states of for example the newborn, elderly or diseased, and how can food formulation be adapted to compensate for this? How will food formulations affect the solubilisation of various hydrophobic micro-nutrients, actives, metal ions and drugs (bioaccessibility) and the absorption (bioavailability) of essential fatty acids, vitamins, Calcium and Magnesium?

Objective of the Lorentz workshop

The purpose of bringing this subject in discussion in a Lorentz workshop is to bring together experts from knowledge fields that usually operate separately on the various aspects. We think of physical chemists studying the adsorption and activity of digestive lipases and the mesomorphic transition structures formed from bile salts and bile phospholipids in combination with fat digestion products. Biochemists studying the molecular structural changes of (pancreatic) lipases in relation the exposure of the active site to the oil/water interface, physiologist that  study the role of lipid digestion and absorption and the role of bile in this, in relation to the physiological response of the body, and food chemists who search for health-related applications in food products. We aim at approximately 15/20 PhD students, post docs or early carrier researcher, and 35-40 senior scientists of which about 20 key scientific experts who give the presentations.

To promote the interaction between workers in different science groups, each topic will be introduced by 2-3 lectures by key experts on those topics, after which a moderated will pose some challenging questions for discussion in smaller mixed discussion groups, which report back their results in a plenary session and a short written document. In this way we look forward to a lively confrontation and open discussions by experts from the various disciplines, leading to new directions and collaborations.

This workshop will be considered a success if it breaks down barriers and leads collaboration between workers in the different science areas, and also attracts attention from those who can apply the information in the food industry. 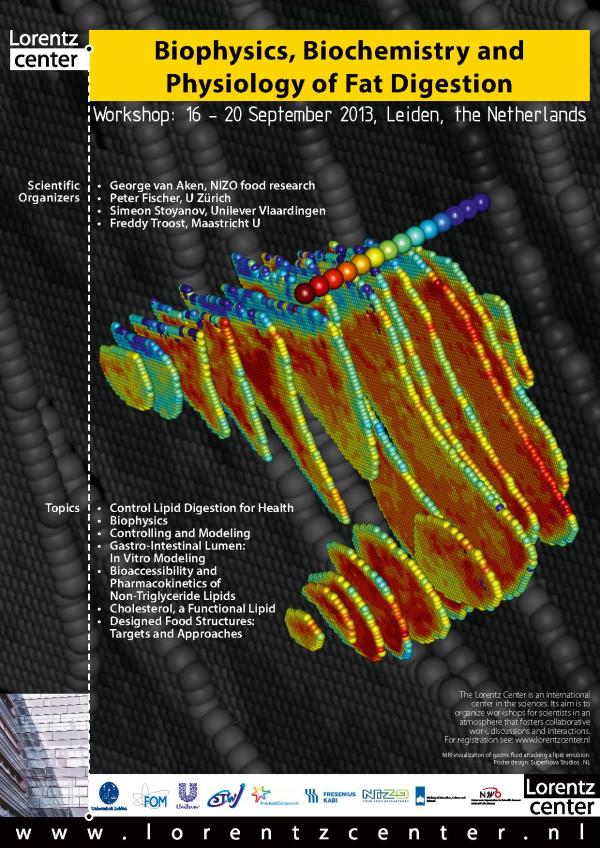