Children Seen and Heard Across the Globe

The field of child development research is dominated by studies conducted in WEIRD societies (Western Educated Industrialized Rich Democratic; Henrich et al., 2010). Thus, most of our knowledge on child development only represents a minority of the world population, and hampers conclusions about the culture-specificity versus universality of the processes described in the current literature.

A relatively small group of scholars from a variety of disciplines do manage to access hard-to-reach non-WEIRD communities off the beaten track to collect video data on a variety of child development domains. These efforts yield wonderfully rich and valuable video data that have the potential to uncover entirely new perspectives on various aspects of child development as studied in a variety of disciplines. However, in reality the video materials are generally only analyzed from a mono-disciplinary perspective, simply because they have been collected within a particular discipline.

The first ‘Children seen and heard across the globe’ workshop took place at the NIAS in Wassenaar in the spring of 2015, and constituted the first steps towards interdisciplinary collaborations to optimize the design of future video-based research studies so that the collected data will be useful to various disciplines. The first workshop was attended by 16 researchers from 9 different countries in the fields of child and family studies, anthropology, and linguistics who each presented their video data sets of children across the globe. The plans that came out of the first workshop include a multidisciplinary pilot study aimed at the cross-cultural testing of procedures and coding systems from child and family studies, anthropology, and linguistics.

The current Lorentz workshop is designed as a follow-up meeting with the following goals:

(C)      Writing and/or finalizing collaborative papers on the existing video data that are now shared between different disciplines. 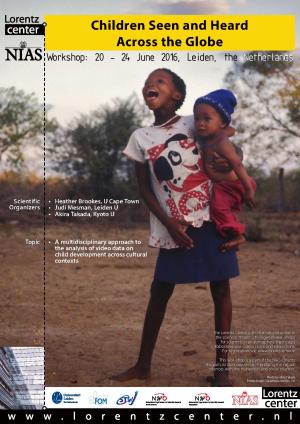