Understanding the glass and jamming transitions is a challenge which resisted a large research effort in condensed matter physics over the last decades, and which is of interest to several fields from statistical mechanics and soft matter, to material sciences and biophysics. From a theoretical point of view, the question is to know whether the sudden, but continuous freezing is due to a true underlying phase transition, or if it is a mere crossover with little universality in the driving mechanism. In the latter case, not much is to be gained conceptually – glasses might just be liquids that have become so viscous that they cannot flow anymore. Interestingly, however, evidence has mounted in recent years that the viscous slowing down of super-cooled liquids, colloids and granular media might be related to the existence of genuine phase transitions, but of very peculiar nature. Contrarily to usual phase transitions, the dynamics of glass-formers (or granular media) dramatically slows down with nearly no changes in structural properties. The nature of the amorphous long range order that sets in at the glass transition, the analogies with spin-glasses and their physically observable consequences, are only beginning to be understood. One of the most interesting consequences of these ideas is the existence of dynamical heterogeneities (DH), which have been discovered to be (in the space-time domain) the counterpart of critical fluctuations in standard phase transitions. Intuitively, as the glass transition is approached, increasingly larger regions of the material have to move simultaneously to allow flow, leading to intermittent dynamics, both in space and in time. Although of crucial importance conceptually, only recently a rather direct experimental evidence for this cooperative motion became available and suggested a cooperative lengthscale of about 5-20 molecular diameters at the glass transition. Recently, single molecule spectroscopy experiments, in which a few individual probe molecules can be followed, have indeed provided the first direct evidence for strongly heterogeneous behavior in supercooled molecular glasses. Of course, information on all particles is clearly accessible in numerical experiments, although these are limited to relatively short time scales. Numerical studies of glass-forming liquids performed well above the glass temperature have indeed hinted at the existence of growing dynamic lengthscales associated to DH. Contrary to glass-forming liquids, in colloidal suspensions and granular materials DH can be measured directly since the “microscopic” lengthscales are much larger than for glass-forming liquids. Indeed confocal microscopy experiments on concentrated colloids have shown increasing DH when approaching the colloidal glass transition. Very recently, similar results have been obtained for granular assemblies close to jamming. This provides an essential information on the jamming transition of colloids and granular materials and strengthen the idea that glass and jamming transition might be related. In the mean time, theoretical research has sharpened predictions and questions about the quantitative nature of DH and their associated lengthscales within different scenarios of the glass transition. Theory has furthermore provided several leads to characterize quantitatively DH in molecular systems, including higher order correlation and response functions (dynamical response and nonlinear susceptibilities) and the special role of boundary conditions and confinement. These ideas have opened the path to a precise, quantitative determination of DH and cooperative lengthscales in molecular glasses, colloidal glasses and spin-glasses. This should allow one to probe in detail, and prune down, different theories of the glass and jamming transitions, which have remained up to now difficult to confirm or to falsify for lack of precise, testable predictions.

This workshop will gather together theoreticians, simulators and experimentalists working on dynamical heterogeneities (DH) in glass-forming liquids, colloids and granular matter. The results obtained up to now clearly indicate that the study of DH is one of the most promising routes to follow in order to characterize and explain the physical mechanisms responsible for the glass and the jamming transition. A characterization of DH -- which appear to be, as noted above, the counterpart of critical fluctuations in standard phase transitions -- with a level of quality and rigor comparable to the best-studied problems in condensed matter physics appears to be within reach.

(3) understand in detail the relationship between glass and jamming transition

(4) transfer knowledge between theoretical and experimental physicists and physical chemists working in the areas of glass-forming liquids, colloids and granular media. 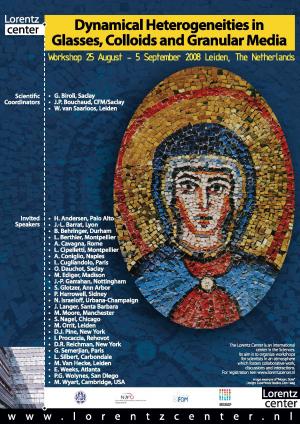 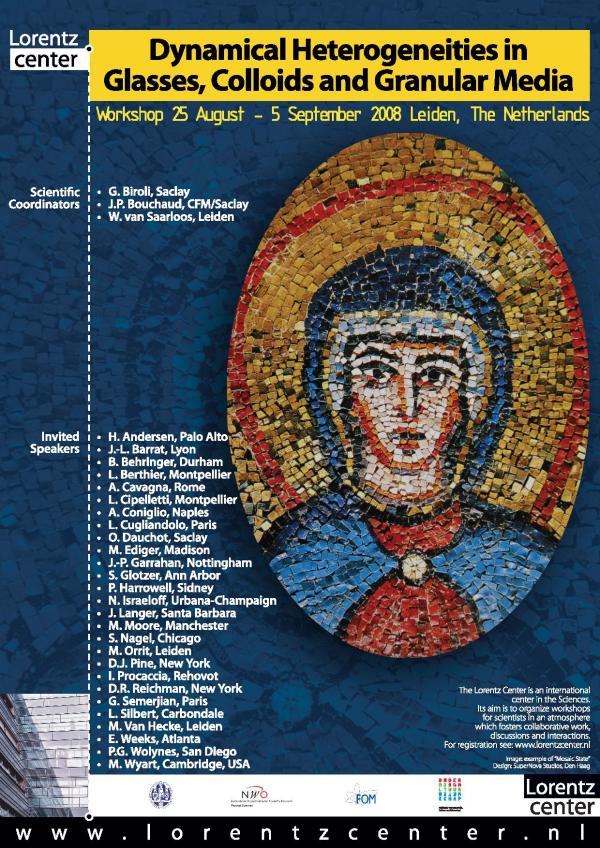