Noise plays a fundamental role in population dynamics, epidemiology and evolution. The sources of noise can be intrinsic, such as a finite number of agents participating in the interactions on the level of populations, cells, genes or single molecules, or external, i.e., environmental noise. The long established approach to model complex biological and population phenomena using deterministic equations of motion is often effective when the noise is sufficiently weak.  In recent years, however, researchers are beginning to identify and understand situations when even weak noise can lead to qualitative changes in the population or disease dynamics or in evolutionary outcomes.  These qualitative effects include rare events such as large fluctuations in the birth-death processes leading to population extinction or switching between metastable states of an ecosystem; initiation of oscillatory behavior in the course of epidemics by weak demographic noise, or creation of complex spatial patterns in ecology or patterns in the space of genotypes.  The demographic noise can lift the degeneracy of coexistence states of competing species producing eventual extinction of one of the competitors.

Developing a theoretical understanding of stochastic behavior is especially important when the models are used to predict dynamics in real-world applications. An important class of problems in ecology and evolutionary biology encompasses the situation where systems are found in the vicinity of a bifurcation and demographic or environmental noise strongly affects the dynamics.  In viral infection dynamics, the analysis of stochastic infection clearance for HIV and HCV suggests modifications to standard drug therapy schedules.  In evolutionary biology, Darwinian selection and random number fluctuations, called genetic drift, compete in driving evolutionary change. It is widely accepted that genetic drift can have significant effects on small populations that may even lead to speciation.

This field of fundamental research has witnessed a recent explosion of important advances in theoretical understanding of these complex interactions accompanied by the invention and development of elaborate analytical and numerical techniques to address these problems.  The theory of large deviations has been developed to include complex spatial evolution in population dynamics and a rich and interesting interaction of intrinsic and extrinsic noise, leading to critical consequences to population and evolutionary dynamics and epidemiology.  A unified theoretical framework embracing quasi-cycles and quasi-patterns emerges with a wide range of applications in population dynamics, evolution and epidemiology:  from patterns in the dry-land vegetation to cyclic evolution in diseases, and speciation.  A new research direction has recently opened with development of an elaborated theory of noise-induced lifting of coexistence degeneracy that can resolve problems of competing species.  There has been substantial progress in understanding a crucial problem of early indicators of shifts in ecosystems and extinction in population dynamics driven by research in the threshold evolution of complex systems such as epidemics or microbial evolution.

The emerging ideas are deep and profound, often utilizing complex and challenging computational techniques. Therefore, a workshop dedicated to fluctuations in population biology, epidemiology and evolution will have the main goals:

·         To bring together researchers in statistical physics interested in biological applications and specialists in biology and ecology wishing to expand their arsenal of analytical and numerical techniques;

·         Disseminate the latest advances in theoretical and computational work; and

·         Stimulate the emergence of new research ideas through intensive collaboration and brainstorming between theoreticians and researchers working with real world data during the workshop.

This meeting is envisioned as a sequel to the very successful  workshop “Giant fluctuations in population dynamics” which took place at the Lorentz Center in 2009. Many long-lasting collaborations were formed at this meeting. We will consider the present workshop successful if we can also achieve this synergy between methods-oriented and data-oriented researchers that would not happen otherwise.

We believe that, under the auspices of the Lorentz Center, the current state of the art can be considerably advanced by bringing new ideas and methodologies to bear on the problem of fluctuation in population biology, epidemiology and evolution. 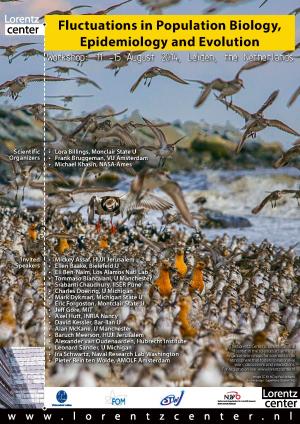 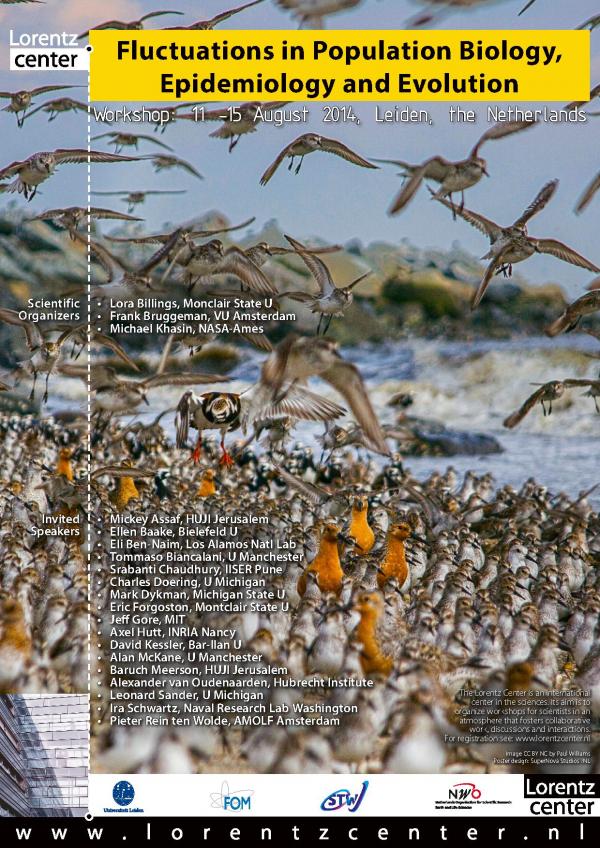