Geometric patterns are a prevailing motive in Islamic art and material culture. They are found in Islamic architecture as well as metal work, miniatures, book decoration and textiles for daily use.

Geometric ornamentation in Islamic architecture includes two-dimensional (mosaic) patterns on flat and curved surfaces, and three-dimensional so-called muqarnas-structures, mostly in the interior of domes. Most of the famous patterns in the Alhambra in Granada are based on squares, octagons, equilateral triangles and hexagons. In the Eastern Islamic world, especially in Iran, one often finds more complicated patterns based on pentagons, decagons, and even heptagons and nonagons. There is still a living tradition in Islamic geometric design that inspires modern artists.

The traditional Islamic patterns are witnesses of a highly developed artistic and scientific culture about which little is known today. Much of the history of this whole tradition is unclear and undocumented. The geometric aspects of Islamic architecture have hitherto been studied in vastly different ways by researchers with a variety of backgrounds, including but not limited to: specialists in Islamic culture and history, historians of art and architecture, historians of science, and mathematicians. There has not been much interaction between these groups, although each of them could benefit from all others.

The aim of the proposed workshop is to bring together scholars of these different backgrounds in order to study the geometric aspects of medieval Islamic art and material culture in an interdisciplinary way and to develop modes of cooperation. We hope to open the eyes of the speakers and participants to the many different branches of Islamic art and material culture where geometric design plays a dominant role, and to gain insight into the traditions in which these patterns are created, At the same time, we hope to reduce, for example, math anxiety among specialists of Islamic culture; ignorance of the importance of cultural contexts among mathematicians, etc. To connect to the living tradition, artists will also be involved.

Much attention will be paid to the Iranian tradition. The workshop will be organized in intensive cooperation with the House of Mathematics (www.mathhouse.org) in Isfahan, where a follow-up conference about Mathematics and Iranian-Islamic Architecture will take place in August

The following interrelated questions are among the ones which will be studied in the present workshop:

1          How were the geometric patterns designed and constructed, what kind of mathematical expertise was used, if any, and what are the surviving textual sources (Arabic and Persian manuscripts, diagrams, etc.)?

3          What can and should be done in order to document the surviving tradition of Islamic geometric design?

4          What scholarship on traditional geometric design is available in the modern Islamic world?

5          Can modern mathematical concepts (such as crystallographic groups) be helpful to describe and classify the geometric patterns and decorations, and/or to give insight in their historical development? If so, how can such a mathematical methodology be communicated so that it can become a useful tool in the hands of specialists in Islamic culture and art-historians?

6          How can mathematical descriptions and analyses be employed in architectural reconstructions (for example, in the reconstruction of destroyed three-dimensional muqarnas from surviving two-dimensional diagrams)?

During the workshop, attention can also be paid to the design of new artistic patterns of the same types as the traditional medieval Iranian ones.

The workshop can include discussions on the symbolic meanings of geometric ornamentation in Islamic art and material culture, but only on the basis of concrete and authentic medieval textual documents.

The workshop will consist of a general interdisciplinary part (September 11 - 13) and a continuation (Sept. 14-15), which emphasizes mathematical and possibly educational aspects. 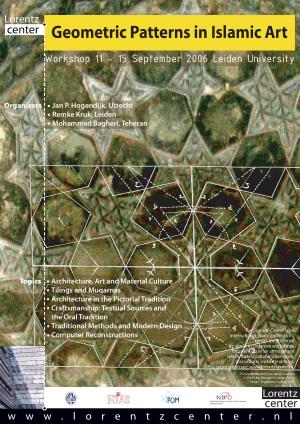 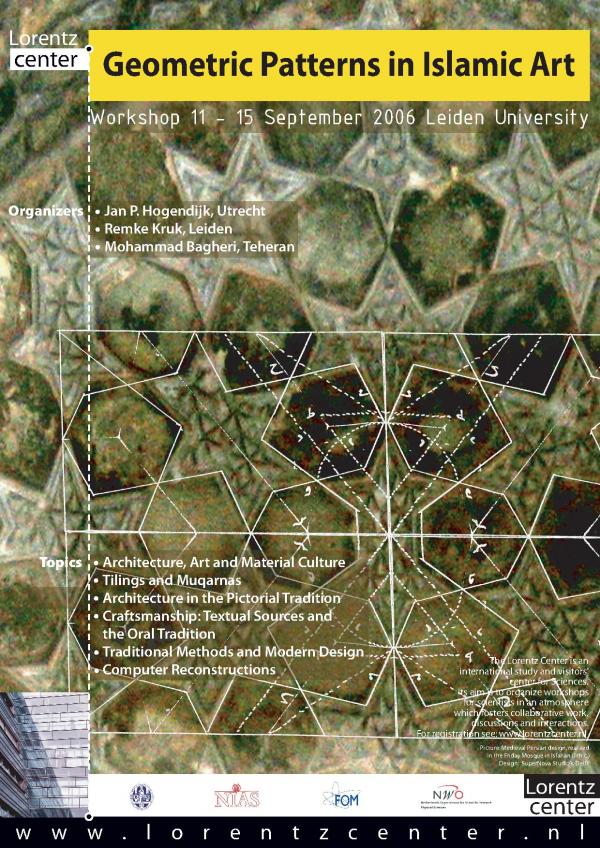