One of the most important questions in science is the nature of dark matter, a very popular candidate particle for which is the sterile neutrino. This particle forms part of a theory that, in addition to dark matter, solves the problem of why standard model neutrinos have mass and why there is more matter than antimatter in the Universe. Some of the parameters of this parent particle physics theory will be constrained by upcoming particle physics experiments. A further subset of the parameters also set the kinematic properties of the dark matter, to the degree that the abundance and structure of galaxies is altered. Finally, the same particle physics properties control how readily the sterile neutrino decays into X-ray photons, a candidate signal of which has been detected at an energy of 3.55keV and is consistent with a 7.1keV mass sterile neutrino.

This analysis — measuring the X-ray line properties, building the particle physics models, dove-tailing the particle physics with the galaxy formation models, and comparing the results to observed galaxies — requires a multi-field collaboration that involves X-ray astronomers, particle physicists, galaxy formation theorists and observers of galaxies. At this workshop we will develop new techniques between these four sets of people to identify the current status of the sterile neutrino as a dark matter candidate, and discuss further prospects for either confirming or ruling out the claim that it is the origin of the 3.5keV line, including uncertainties in background modelling, novel gas physics lines, and alternative dark matter theories.

Our main questions / aims are:

-          How do we test the sterile neutrino against other dark matter candidates as well as against observation / experiment?

-          How do we compare theory, simulations and observations in a systematic way?

The general goals of this workshop are:

-          Identify new galaxy observables to compare between observations and models.

-          Constrain the systematic uncertainty of the mass content of targets.

-          Make state of the art predictions for the expected dark matter line signal. 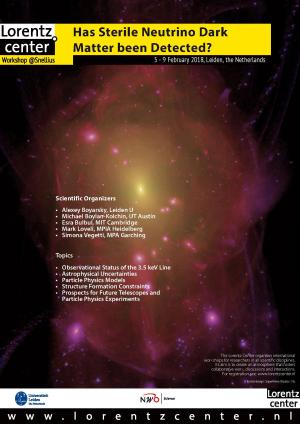 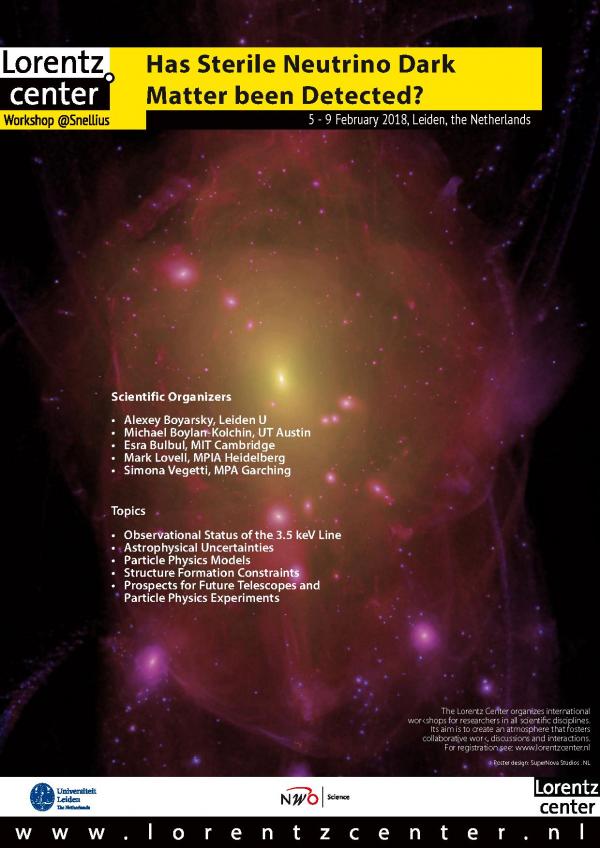