The overall aim of the workshop is to build a fuller understanding of solar flares, exploiting synergies with fusion plasmas and developing new integrated modelling approaches to impulsive energy release in astrophysical plasmas.

Solar flares are the largest “explosions” in the solar system, representing a dramatic release of stored magnetic energy in the solar atmosphere. Flares have signatures in emission across the electromagnetic spectrum, from radio to gamma rays, and are associated with strong heating of plasma in the corona as well as populations of energetic charged particles. A combination of space observations and theoretical modelling has made huge advances over recent decades, and the primary release of stored magnetic energy through the process of magnetic reconnection is now well-established. However, there are still many fundamental unanswered questions about how energy is released and transferred in flares: especially, relating to physics outside the MHD paradigm, the recently-discovered ubiquity of MHD waves in the corona, and to processes in the lower layers of the atmosphere. For example:

·         What is the origin of the large numbers of non-thermal energetic ions and electrons?

·         How is energy transferred from the corona to the chromospheric footpoints?

·         What triggers the flare explosion after a period of slow energy accumulation?

·         What is the nature of turbulence in flares, and what is its role in particle acceleration?

·         What are the characteristics of energy-release processes in the weakly-ionised and highly-structured chromospheric plasma?

A wealth of recent observations from space-based observatories such as RHESSI and SDO, and from ground-based radio instruments, have transformed our knowledge of the processes in flares, whilst also presenting new questions for modellers. A full understanding of flares must account for an immense range of spatial scales, from global scales of coronal magnetic loops (around 10,000 km) to small plasma scales such as the ion gyro-radius (around 1 m) – this requires integrating large-scale fluid models with small-scale plasma kinetic models. Furthermore, flares affect both the tenuous hot corona and the much denser, cooler chromosphere – this presents a further challenge for models, requiring an understanding of partially-ionized plasmas. A new, rapidly developing topic is the role of MHD waves in flares and Coronal Mass Ejections: including the triggering of magnetic reconnection, particle acceleration, modulation of flaring emission and quasi-periodic pulsations, as well as diagnostics of flare morphology through MHD waves. At the same time, advances in computational plasma physics techniques and in computer power mean that quantitative and realistic modelling is now a real possibility.

This better understanding of flare physics would have important benefits for explaining other instances of astrophysical energy release, such as geomagnetic sub-storms, stellar flares and gamma ray bursts. Furthermore, flares – and associated Coronal Mass Ejections - have major practical implications through “space weather”, whereby radiation and energetic particles can have serious detrimental effects on satellites, power systems and other technology. Advances in modelling of flares will lead to better understanding and accurate prediction of space weather.

It is thus very timely to bring together modellers with expertise in different approaches, in order to develop new and integrated models of solar flares which can explain the complex observations and provide real understanding. This is the aim of the proposed Workshop. We are assembling experts on solar flare modelling alongside scientists with relevant plasma expertise from space physics and fusion. Whilst the focus is on new models, it is essential that this is done in the context of observations, so some flare observers will also participate. The multi-disciplinary and multi-facetted nature of the addressed problem requires the combination of expertise in very different fields.

A main goal of the Workshop will be to build an integrated model of flare processes – starting with the primary coronal energy release, then the energy transfer through particles, waves or other means to the dense chromospheric footpoints, then back to the corona. This must bring together experts on such diverse topics as magnetic reconnection, plasma waves, turbulence, shocks and particle acceleration. Furthermore, it is necessary to integrate fluid models with kinetic models, as well as partially-ionised plasmas. Traditionally, modelling of the solar corona has focused on MHD (fluid) models, and for this reason we include participants with relevant expertise from space and laboratory plasmas, such as kinetic models of magnetic reconnection, waves and shocks. The complexity of the physics in solar flares means that progress requires sophisticated computer simulations, and it is necessary to integrate complementary numerical approaches, including Vlasov, Particle-in-Cell, Hall and single-fluid models.

An immediate outcome of the Workshop will be to produce a “white paper” report, publishable for example in Space Science reviews, outlining the current state of flare modelling and the next steps to be taken. Furthermore, at the end of the meeting, each Working Group will produce a timetabled set of specific actions for ongoing collaborations, bringing together complementary codes and modelling approaches, leading to publications and integrated software.

The measure of success for the Workshop will be the establishment of new multi-disciplinary research teams that bring together complementary expertise and continue to work together to produce joint publications and software for integrated modelling of solar flares. These teams will make new breakthroughs in resolving some of the questions posed above, by combining different approaches, and applying state-of-the-art plasma modelling and simulation techniques. This will make a real advance in our understanding of the complex physical processes in solar flares: thus building towards a genuine predictive capacity for space weather, and having significant applications across space physics, astrophysics and fusion plasma physics.

The Workshop will feature a series of overview talks on key topics in flare models from leading experts, as well as an overview of observations and talks on relevant modelling in other areas of plasma physics. (A draft timetable is attached.) The main activity will be small group discussions, with the aim of developing new collaborative projects leading to publications, in 4 Working Groups as follows (with provisional assignation of convenors):

·         Energy transfer from corona to chromosphere and partially-ionised plasma physics in the flaring chromosphere (Lukin/De Blank);

·         Generation of waves in flares, the interaction between reconnection and waves, and waves as a flare diagnostic (Nakariakov);

Each Working Group will be comprised of about 4 – 6 people, with group membership agreed by email discussion prior to the Workshop. A few participants with core expertise (e.g. flare observations, global magnetic field modelling) may move between the Groups. These activities will be integrated by regular plenary reports, with the additional possibility of two Groups meeting jointly for a session to discuss areas of overlap (e.g. generation of waves in reconnection; energy transfer by accelerated particles; energy transfer by waves; partial ionisation in reconnection).

The Workshop will begin with extended review talks with Q&A, followed by a plenary discussion focussing on identifying key problems to be tackled. In particular, initial plenary discussions will agree on a detailed set of unsolved problems to be tackled and the observational constraints that must be satisfied. An inventory of the various computer codes and numerical approaches available will also be established.  Subsequent days will have extensive time for Working Group meetings, as well as further review talks, by leaders in the field, and short participant talks at the start of the day, with a plenary discussion each day to bring together the different strands and review progress. The “participant talks” will allow each participant (not presenting a review) to give a short presentation on their relevant research activity. 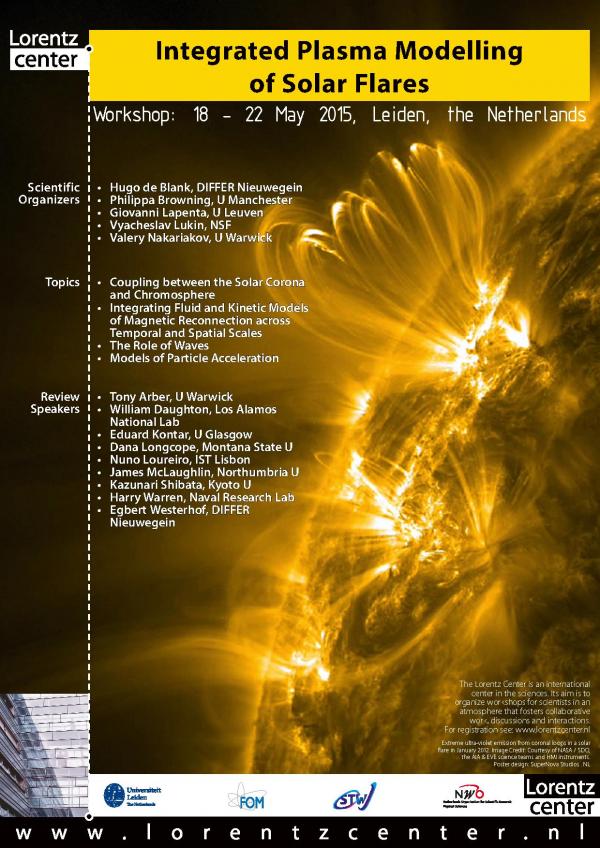