The purpose of this interdisciplinary workshop is to bring together scientists working on the effect of surface/interface disorder on physical properties of various micro- and nanosystems. The participants will include theorists, experimentalists, computational physicists, material scientists, etc. The goal is to delineate common problems and approaches and, ultimately, to initiate collaboration between the groups working on the effects of surface modulation in such diverse areas as optics, electronic transport, low dimensional systems, hydrodynamics, etc. Physicists and material scientists working in these seemingly different fields often face a common challenge – to deal with and benefit from natural or artificial surface and interface disorder. Despite the commonality of problems, researches are often unaware of progress beyond their narrow area of expertise. The proposed workshop will address this gap.

The workshop is focused mostly on particle and wave propagation and

hydrodynamic flows in various types of channels with rough walls and on the origins of such roughness in system growth, deposition, and fabrication. A more detailed preliminary list of topics is given below. This list can be adjusted in order to better reflect research interests of participants. In this spirit, we welcome suggestions from the potential participants.

Usually, the surface disorder aspects of these issues are discussed, often as an afterthought, within the corresponding topical conferences. As far as we know, this workshop is the first attempt to bring together physicists based on their work on surface/interface disorder irrespective of the application areas. We want to give time for researchers from different fields to get acquainted with each other and, if possible, to initiate interdisciplinary collaborations. We hope that the workshop format will help to reveal common theoretical and experimental techniques, such as, for example, the mapping transformation method or scanning probe microscopy, that can be successfully transferred between the application areas.

Specific issues to be discussed include:

¨       Mismatch and strain effects during growth and formation of rough interfaces.

¨       Roughness scaling in organic films and its implications to electronic devices.

¨       Wettability of nanostructured surfaces (i.e., lotus effect and other systems)

¨       Effect of roughness on propagation and localization of surface waves

¨       Influence of interface structure on light transmission and reflectance.

¨       Propagation/localization of radiation in waveguiding structures with surface disorder

¨       Influence of interface roughness on giant and tunnelling magneto-resistance.

This is an open workshop. We invite all our colleagues, in particular those in the Netherlands, to participate. We specifically encourage participation by junior scientists (graduate students and postdocs). The number of potential participants (up to 45 people) is limited only by the capacity of the facilities and availability of funds. The invited speakers (about 20 people) will be chosen equally between experimentalists, theorists, and computer simulation experts within all fields. Each invitee will be asked to present an overview-type talk on the corresponding research area.
Read more... 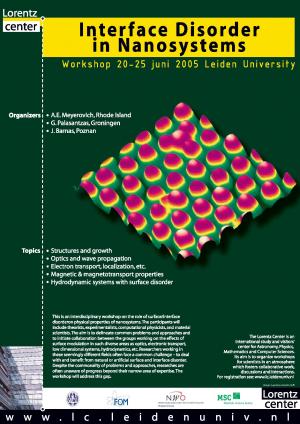 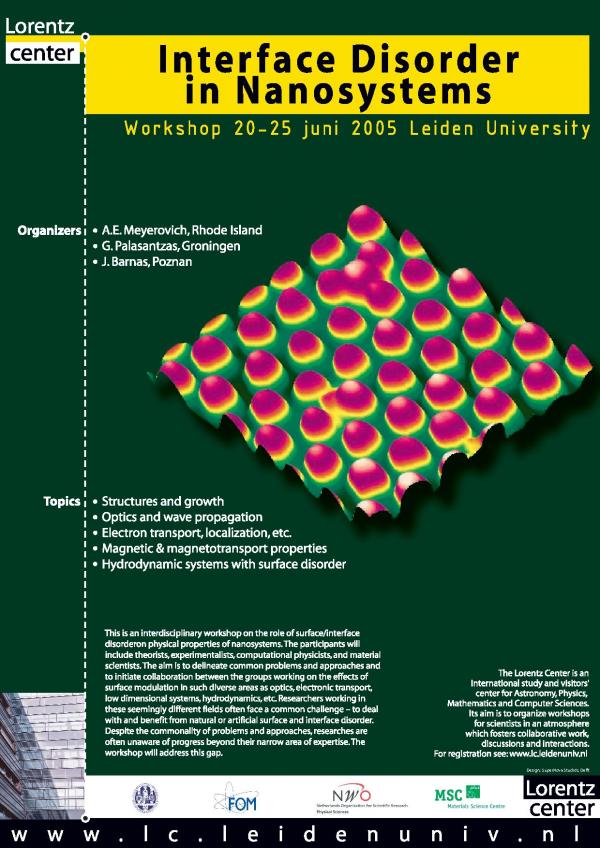