Isotopes in Astrochemistry: An Interstellar Heritage for Solar System Materials?

The matter comprising the Sun and the planets, well as the comets and asteroids, originated in the dense core of an interstellar cloud over 4.6 billion years ago. The aim of the workshop will be to obtain a clearer picture of the fate of observed interstellar isotopic fractionation patterns as they were incorporated into the protosolar nebula. A major goal would be to ascertain which of the molecular isotopic signatures found in primitive Solar System matter are indicative of pristine interstellar molecules.

The workshop would be timely, bringing together scientists from different communities to present the state-of-the-art knowledge in their respective areas of expertise, and also provide a forum for younger scientists wishing to become acquainted with the big picture. Herschel is measuring isotopic ratios in many key interstellar molecules, particularly water, and ALMA offers the prospect of going deeper to obtain isotope ratios in low-abundance molecules, including those doubly-substituted in carbon, hydrogen and nitrogen isotopes.  Within the Solar System, analyses of Stardust and other meteoritic samples is ongoing with contributions expected in the near future both from Herschel and ALMA, as well as, in the longer term, from Rosetta and a comet sample return mission.

The primary focus will be on the volatile elements. Issues to be addressed will include: (1) the contribution of stellar nucleosynthesis to Galactic chemical evolution, (2)  observed isotopic fractionation in interstellar clouds, (3) chemical models of  gaseous and solid-state isotopic chemistry, (4) isotopic anomalies in meteorites and IDPs (including the Stardust sample), (5) presolar grains, (6) isotopes in comets, (7) observations and models of  isotopic fractionation in protoplanetary disks, (8) new results from Herschel and ALMA, (9) proposed list of key astronomical observations and laboratory sample measurements to be made.

This workshop will be considered a success if the participants develop common goals and future research directions in isotope studies between the diverse communities.  Specifically, compile lists of key problems to be addressed by future astronomical observations, laboratory sample analysis, and theoretical studies.

The list of confirmed speakers will provide informative presentations and generate the focused discussions necessary to make progress on these issues. The Lorentz Center will provide an excellent environment for this interdisciplinary workshop. The focus of the workshop complements the strong Dutch research tradition in astrochemistry and molecular astrophysics; we anticipate that a significant number of the contributed talks will be from younger members this community, particularly those affiliated with the recently founded Dutch Astrochemistry Network. 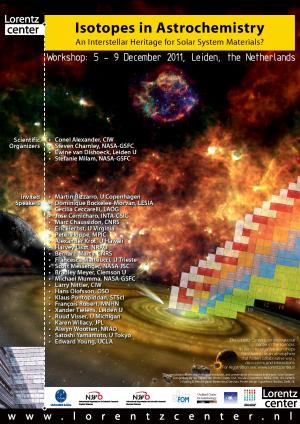 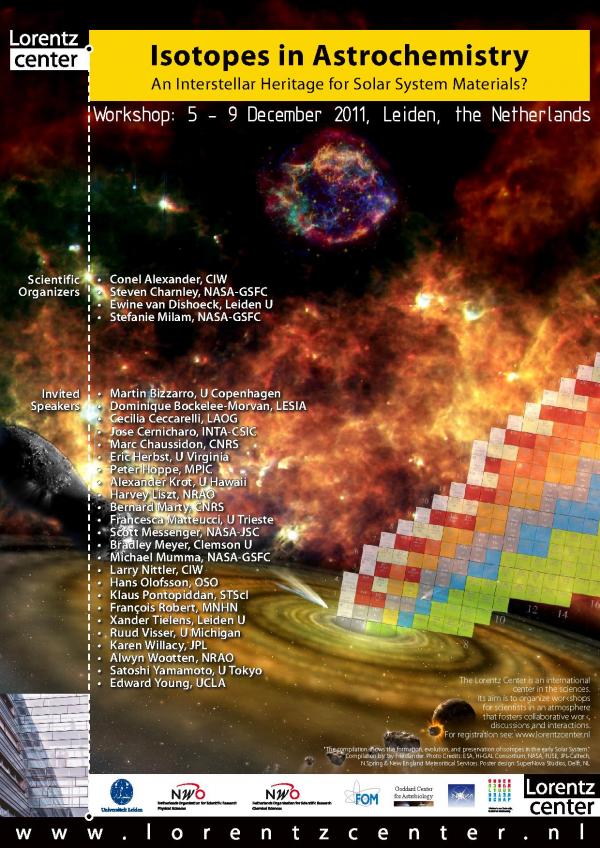