Liquid Fragmentation in Nature and Industry

The fragmentation of compact macroscopic objects bridges complicated microscopic phenomena with non-trivial and often broad statistics, namely that of the fragment sizes. Examples are fracture in solid comminution and breakup in liquid atomization (which literally means “to subdivide down to the atom size”). Very soon in history, from the time when the need was felt to rationalize empirical practices in ore processing, questions about the principles of matter division have been recurrent in science, up to more recent development in nuclear fission. For instance, Lavoisier (1789) devotes chapter IV of his Elementary Treatise of Chemistry to the different techniques to divide matter, and the monumental treatise of Coulson and Richardson (1968) has several sections dealing with the many “unit operations” of the chemical industry to fragment, atomize, blend and mix. The timeless character of the subject is certainly not a sign of absence of progress, but rather reflects its ever-renewed field of application.

In all these applications it is desirable to have an a priori knowledge of the liquid dispersion structure and in particular the distribution of droplet sizes as a function of the control parameters such as injector size and shape, wind speed, liquid surface tension etc. This workshop intends to gather specialists from both academia and industry around these questions in order to offer an up-to-date vision of the state of the art on the problem as a whole.

The main goal of the workshop is to bring together people from different backgrounds (fluid physics, environmental sciences, biology, engineering, geophysical sciences, industry) together around their common interest: how does a bulk liquid break up into small fragments? The specific topics we would like to discuss during the week include: liquid fragmentation by impacts, collisions or shocks; ligament dynamics; spray formation; thin film break-up; experimental techniques to visualize liquid fragmentation; liquid fragmentation in extreme ultraviolet lithography, biology, environmental and geophysical sciences. The week will consist of keynote lectures, contributed talks and plenary discussion sessions. In addition there will be ample time for spontaneous discussions and lectures. 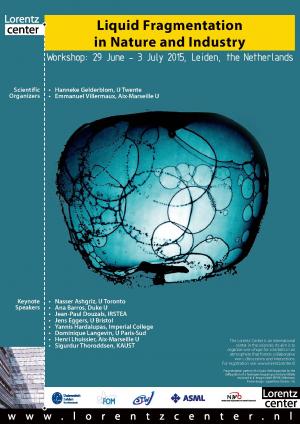 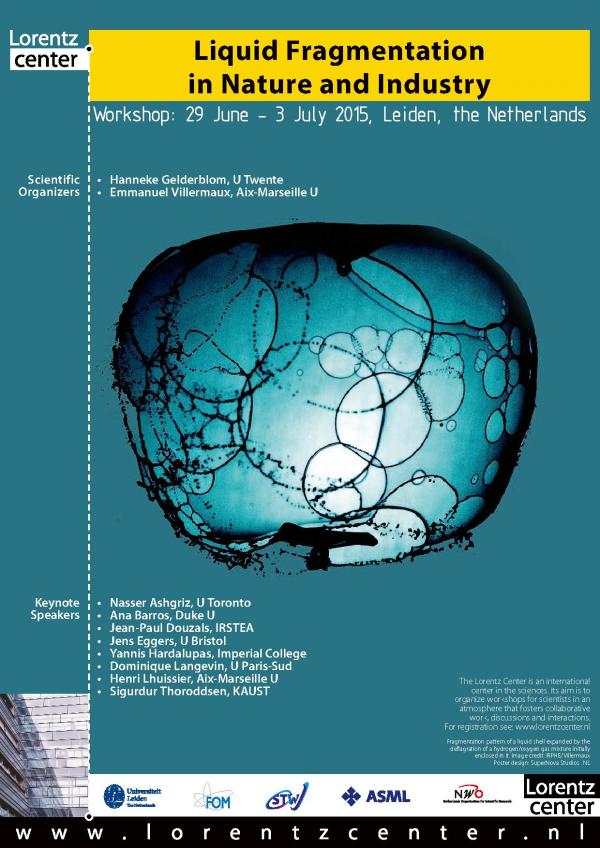