This Workshop will bring together star formation modelers and observers of all kinds, to explore in concert the optical, IR, and sub-mm populations of young stellar objects and their interactions with the interstellar medium in the Magellanic Clouds.  To elucidate the processes of star formation, we must study the multiphase ISM along with forming stellar populations at various stages of their evolution and star formation triggering mechanisms.  These elements are revealed in different wavelength regimes and via different observational techniques, and we plan to gather observers and theorists examining Magellanic star formation from different perspectives to form a more global view and forge new collaborations.  The Hubble Space Telescope (HST) has provided us with an unprecedented inventory of stellar populations down to the sub-Solar mass regime in select Magellanic star-forming regions.  The galaxy-wide SAGE and HERITAGE surveys of the Clouds with the Spitzer Space Telescope and the Herschel Space Observatory have completed these inventories, revealing populations of deeply embedded young stellar objects.  These surveys also directly trace the interaction of the massive stars with their environment through the mid-IR emission of large Polycyclic Aromatic Hydrocarbon molecules and the far-IR and sub-millimeter emission of dust grains, while studies with Chandra and XMM trace the hot gas resulting from stellar winds and supernova explosions in and around (super) star clusters such as 30 Doradus, N11, and N44. The first results of ALMA are also becoming available tracing the raw material for star formation, the molecular clouds, in these same regions.

We will also create new links with the Milky Way and distant star-formation communities.  The key issues at the interface of these communities are: What can studying Magellanic star formation tell us about Milky Way star formation? How can we leverage Milky Way star-formation studies to better understand Magellanic star formation? To what extent can we use the Large and Small Magellanic Clouds as stepping stones toward analyzing and understanding star formation in other galaxies, particularly at redshifts greater than 1? Unlike most low-metallicity galaxies, the stellar content of the Magellanic Clouds can be resolved, linking the structure and morphology of the ISM with the characteristics of the newly formed stars on the scale of whole associations and (super) star clusters.  Thus, studies of Magellanic star formation can provide us direct insight into global aspects of star formation. Within the Milky Way, this is inaccessible due to confusion and the large angular scales involved, while for galaxies more distant than the Magellanic Clouds the spatial resolution of current telescopes is insufficient to resolve individual stars, particularly in crowded star-forming regions.  At high redshifts, even the star-forming regions themselves cannot be resolved.

This will be a true workshop with ample time scheduled for collaboration.  By bringing together experts in diverse topics relevant to star formation in the Magellanic Clouds, this Workshop will spur new projects. In particular, we anticipate that groups will begin new collaborations that are likely to combine experts in observations in different wavelength regimes (X-ray, UV, optical, IR, FIR); stellar and proto-stellar populations with dust and the ISM; comparisons between Magellanic, Galactic and distant star-formation.  This will be especially timely with the likely HST observing proposal deadline within a week of the Workshop.

This Workshop will deemed a success if the characteristics of the populations of stars - including young stellar objects - and if star clusters can be linked to the activity, morphology, and physical conditions of the interstellar medium and global star formation indicators.  Topics to tackle during discussion and working time include:

-   How do proto-/stellar populations revealed by HST and Spitzer relate to dust and gas as observed with HST, Spitzer, and Herschel? (Looking at structure and morphology, chemical composition, dust processing)

-   What can the Magellanic Clouds tell us about star formation in distant galaxies (specifically z~1-1.5 dwarfs)?

-   (How) Can we use studies of individual star-forming regions to understand galaxy-scale star formation? 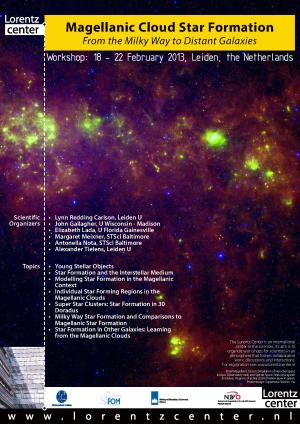 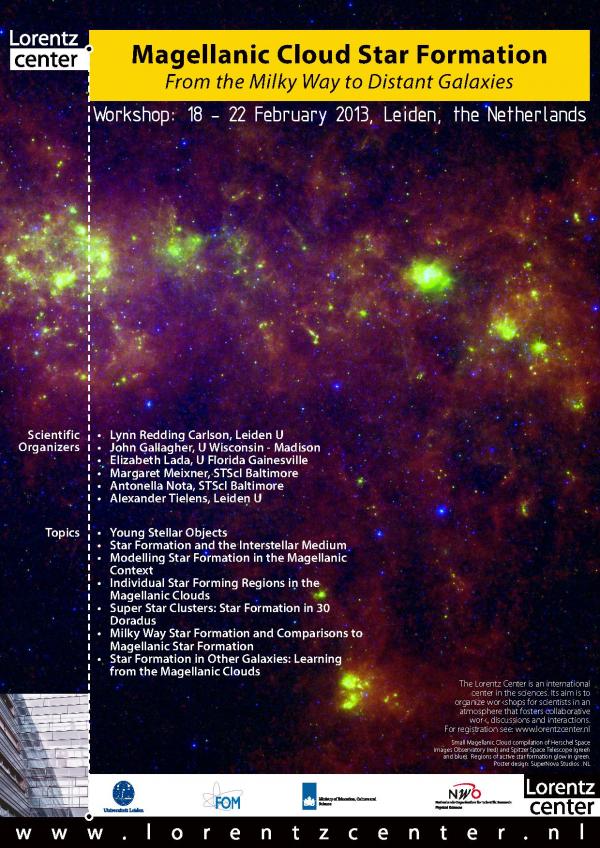