This workshop is from 19 May (afternoon) until 30 May (morning)  Mathematicians and physicists have recently devoted a great deal ofeffort towards the understanding of synchronization and emergingcollective phenomena in complex networks of many interactingelements. Neuronal networks of the central nervous system areprototypical examples of this class of systems. Collective phenomenathat emerge in such networks are currently investigated by bothexperimental and theoretical neuroscientists. Synchronizationphenomena are a prominent example of collective phenomena that havebeen observed in many different brain structures and behavioralcontexts, under both physiological and pathologicalconditions. Synchronized oscillations have received particularattention because they are prominent in the cortex of the awake brainduring attention, and have been implicated in higher level processes,such as sensory binding, awareness, storage of memories, and evenconsciousness. From the clinical point of view, abnormalsynchronization seems to play a crucial role in important neuraldisorders such as Parkinson, epilepsy and essential tremor. However,fundamental questions about such synchronized phenomena still need tobe answered: What are the mechanisms leading to synchrony in neuronalsystems? What are the functional roles, if any, of synchronizationphenomena?  How can abnormal synchronization be avoided or controlled? An active collaboration among researchers working in dynamical systemsand complexity theory with neuroscientists is essential to makesubstantial progress in the understanding of such mechanisms.  Suchdialogue is all the more needed given recent progresses inexperimental techniques, which now provide an unprecedented view ofthe dynamics of brain networks. For example, it is now possible tocollect data about the activity of large ensembles of cells, tounderstand the interrelationships between activity in different brainstructures, with a detailed mapping of the connections between thoseareas, and to probe the effect of particular genes and molecules onthe dynamical behavior of biological neural networks.  Experiments incognitive neuroscience have demonstrated how dynamical phenomena, suchas information carrying modulations of neural coherence, phase coding,etc. play a decisive role in the encoding and processing ofinformation.  These experimental data represent at the same time themotivation and the validating benchmark for quantitative models ofbrain functioning that use concepts and tools from dynamicalsystems. Moreover, nonlinear time-series techniques are needed toextract meaningful information from experimental data, e.g.:multivariate measures are essential to study the relationships betweensimultaneously recorded signals. The main topics addressed by the workshop include: * Synchronization in low and high dimensional systems;  * Emergence of collective dynamics in networks;  * Nonlinear data analysis: univariate, bivariate and multivariate measures;  * Modeling of neuronal networks: dynamical and topological aspects;  * Study of the dynamics of neural circuits, in vitro and in vivo approaches;  * Control and modelling of brain oscillations and rhythms; * Large scale, inter-structure coherence and synchronization:    evidence from human MEG and EEG data  Aims of the workshopThe aim of the workshop is to strenghten the communicationchannels between the (overlapping) communities of dynamical systemstheorists, computational and experimental neuroscientists, in order tostimulate fruitful interactions and exchanges of ideas.  In particular, it aims to put into contact researchers working in nonlinear dynamics andtime series and pattern analysis, together with computationalneuroscientists involved in the study of realistic neuronal circuits,together with experimentalists that are characterizing, with the helpof modern technologies, the nature of interactions in neural networks,and the cellular and molecular basis of synchronization in suchnetworks.  APPLICATIONSThe participation to the workshop is open to everybody who is justinterested in following the lectures and talks, in this case noapplication is needed. However, those who want to be actively involved in the workshop withpresentations, discussions etc. should apply by filling the form"Interest in Participation" before  March 1st, 2008. A selection will beperformed by the organizers and the notification of the final decisionwill be sent to the applicants by March 15, 2008. Only at this date itwill be possible to decide the kind of presentation (oral or poster)for the selected candidates.  Please notice that, in order to preservemuch free time for informal discussions and joint research work, onlyfew oral presentations will be scheduled. No fee is required, but no financial support can be given to applicants due to budgetary restraints.  IMPORTANT DEADLINES: *  March 1st, 2008  last day for applying for the participation by filling   the form "Interest in Participation" * March 15, 2008  Notification of the final decision to the applicants    ===========================================================================INVITED PARTICIPANTS   [(*) to be confirmed]=========================================================================== TUTORIAL LECTURES P. Fries       (Nijmegen, The Netherlands)P. Grassberger (Calgary, Canada)D. Hansel      (Paris, France)P. Jonas       (Heidelberg, Germany)E. Ott         (Maryland, USA)A. Pikovsky    (Postdam, Germany)M. Tsodyks     (Rehovot, Israel)  FOCUS TALKS    P. Colet         (Mallorca, Spain)  S. Coombes        (Nottingham, UK)S. Gielen         (Nijmegen,. The Netherlands) B. Gutkin         (Paris, France)V. Hakim                  (Paris, France)        O. Jensen                (Nijmegen, The Netherlands)T. Kreuz   (San Diego USA)A. Longtin        (Ottawa Canada)M. Mehta          (Brown, USA) S. Neuenschwander (Frankfurt, Germany)O. Paulsen        (Oxford, UK)A. Politi         (Florence, Italy)R. Quian Quiroga  (Leicester, UK)A. Riehle                  (Aix-Marseille, France)P. Roelfsema      (Amsterdam, The Netherlands)H. Rotstein       (Newark, USA) A. Sirota     (*) (Piscataway, NJ, USA)  C. Tallon-Baudry  (Paris, France)P. Tass                    (Juelich, Germany)M. Timme          (Cornell, USA) R. Traub                  (New York, USA)C.J.Tessone       (ETH, Zuerich)M. Zaks           (Potsdam, Germany)
Read more... 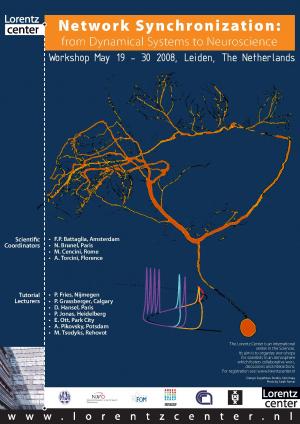 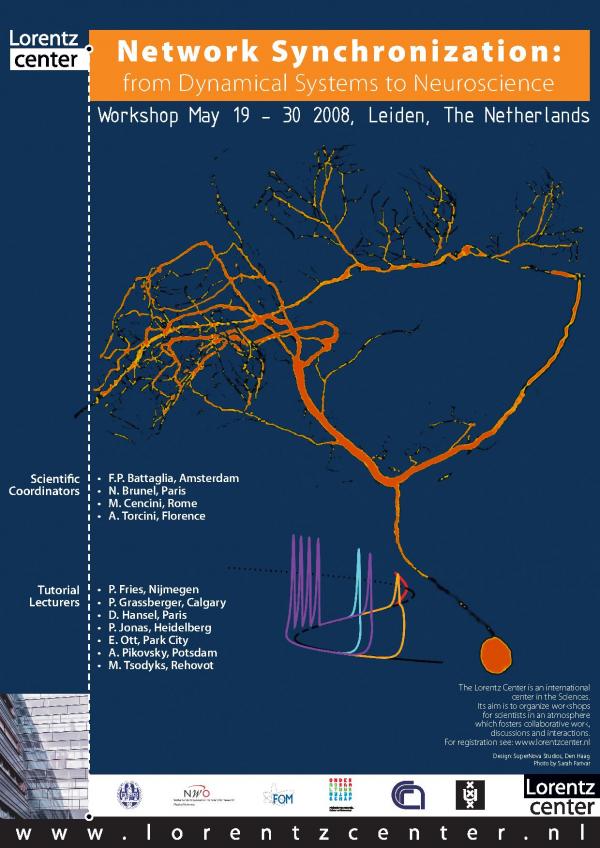