Humans are first and foremost social animals. So, what happens when social animals (humans, primates, and other social animals) are deprived of their most essential attribute? One of the most ubiquitous forms of social control in animal groups and humans, from dyads to nation-states, is ostracism—ignoring and excluding. A vast and diverse literature exists across the humanities and social sciences addressing the impact of ostracism, for individuals, relationships, and groups and societies.

We will examine the impact of ostracism, exclusion, and rejection on the individual, from micro- to macro- perspectives. At the micro-level, how does being ignored, excluded, and rejected affect our brain? How do certain genetic predispositions and hormones affect our response to ostracism? At the intra-individual level, what is the relationship of ostracism to embodied perception? How does it affect our moods, motives, cognitions, and behaviors? At the interpersonal and relationship level, how do we relate to others after being rejected? What role do individual differences play in our responses to exclusion and rejection, especially as they might relate to our relationship partners? Finally, at an intergroup and societal level, what groups attract marginalized people, how do groups respond to ostracism, and how does exclusion affect our ideologies and propensities to join extreme and perhaps dangerous groups? How tolerant are ostracized groups to diversity from within? How do they relate to other groups?

Considerable laboratory work by social psychologists has established the fundamental threat that ostracism exacts on the individual. A brief and seemingly innocuous episode of ostracism—by strangers no less—is sufficient to activate pain regions in the brain, to lower peoples’ sense of belonging, self-esteem, personal control, and existential feelings of life’s purpose and meaning and one’s worthiness of attention. At a group level, ostracism provides protection and strength to the group who uses it, while simultaneously motivating the ostracized individual to correct the undesirable behaviors so as to return to the fold, to embark on joining new groups, or to try to survive alone. The desire to be reconnected with others may cause indiscriminate group-joining, and may render individuals susceptible to social influence and conformity pressures that make them automatons of the new groups to which they join. Groups who are ostracized by even larger groups and societies may turn toward behaviors that provokes and forces the world at large to recognize their existence and their worth. Such behaviors may result in atrocities, violence, and terrorism, simply to regain a sense of meaning, finding a place in the world, and forcing others to reckon with their impact and existence.

Goals: Research in the area of ostracism, exclusion, and rejection is at an all-time high. We are now past the point of simple demonstrations and replications, and are now examining the processes, mediators, and moderators. The goal of this workshop is to bring together the top researchers working on ostracism, exclusion, and rejection, who work on these topics from varying levels of analysis, to determine (a) where we stand, (b) where we agree, (c) where we disagree, and (d) future directions for as yet unexplored research. Many of these researchers have not met personally, yet are interested in the same topics and are aware of the others’ research contributions. This will give these researchers a chance to meet, and hopefully, to encourage future collaborations. It is also possible that an edited book will be discussed as a future goal with the participants of this workshop. 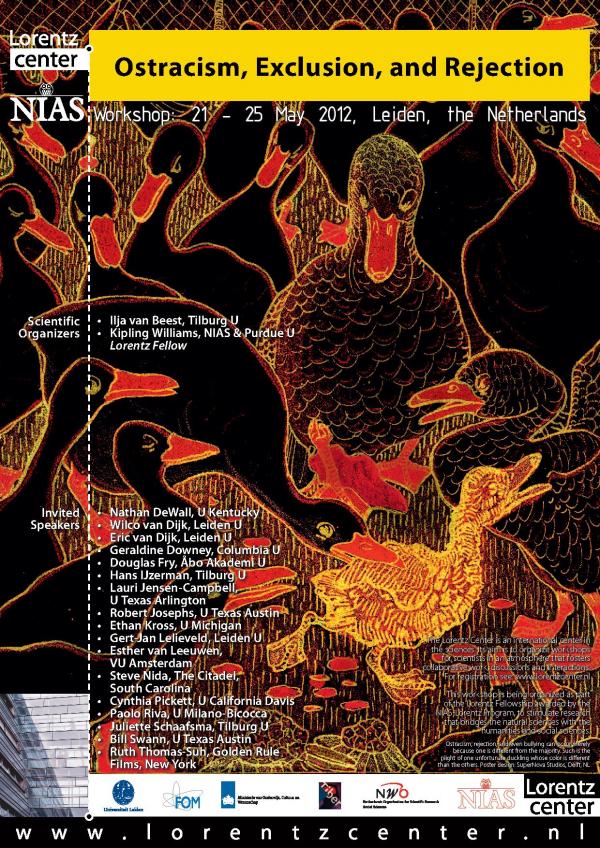