The merger of two stars is a process that touches many branches of modern astrophysics and is responsible for some of the most spectacular astronomical phenomena. From the explosion of massive stars to the formation of helium sub dwarfs, stellar mergers provide key insight into the physical processes which govern the structure and evolution of stars. Many exotic types of star are thought to be born in stellar mergers: blue stragglers, sub dwarf O and B stars, extreme

helium stars, R Coronae Borealis stars, the R stars and V838 Mon to name just a few. Stars may not survive a merger, as in Type Ia supernovae and gamma-ray bursts, or may explode soon afterward, as conjectured for SN 1987A. From a statistical point of view, mergers are expected to be a common outcome of certain types of binary evolution and of the interaction of stars in dense clusters. Many stars may be as yet unrecognized remnants of such mergers, and one

would like to know which observational signatures may reveal their history.

We will bring together observers and modelers of stellar mergers for a two-week workshop at the Lorentz Centre, Leiden, to discuss debate and advance toward the next generation of observations and simulations of stellar mergers. During both weeks we will concentrate on answering particular scientific questions. The first week will focus on combining observations and theory of merger progenitors and products, while the second week will focus on the merger process itself and

Key questions to be addressed during the workshop:

ð       What are the most important channels for stars that merge?  What are the statistics of binary merger progenitors, e.g. W Uma, AM CVn stars, in the field, in stellar clusters and in the Galactic centre?

ð       Which stars were born in a merger event and what are their observational properties? Which mergers lead to an explosive event e.g. SNe Ia, gamma-ray bursts?

ð       How well established is the theory behind stellar mergers and what is poorly understood? e.g. RLOF, common envelope evolution, contact   binary evolution, associated mixing, nucleosynthesis, and the role of magnetic fields.

ð       Which methods are or can be used for modeling stellar mergers:   hydrodynamics, stellar dynamics, stellar evolution codes, population   synthesis, and/or combinations of these? How can these be improved?

ð       What will future observational surveys (e.g. GAIA) offer to the study of stellar mergers?

The formal program for each day will centre on a specific theme. Within each major theme, there will be two review talks, and space for a small number of short talks, spontaneous contributions, and led discussions. Ample time will be available for collaboration, brainstorming, poster sessions and the fruitful Lorentz centre coffee breaks. Students will be encouraged to prepare and present posters during the workshop.

A number of astrophysical interesting test problems will be provided in advance of the workshop. Delegates will be invited to run suitable simulations and to discuss and compare these during informal workshop sessions. The Lorentz Center provides an ideal environment for this workshop format, with meeting rooms and office space for participants.

To maintain a workshop atmosphere, the maximum number of participants will be limited to 30 at any one time. In order to achieve this target, participation will be by invitation only. 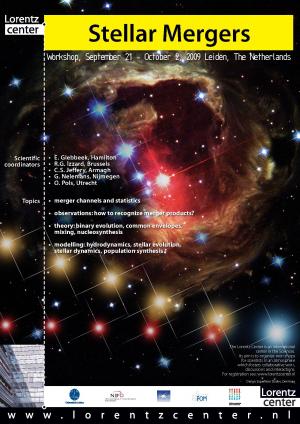 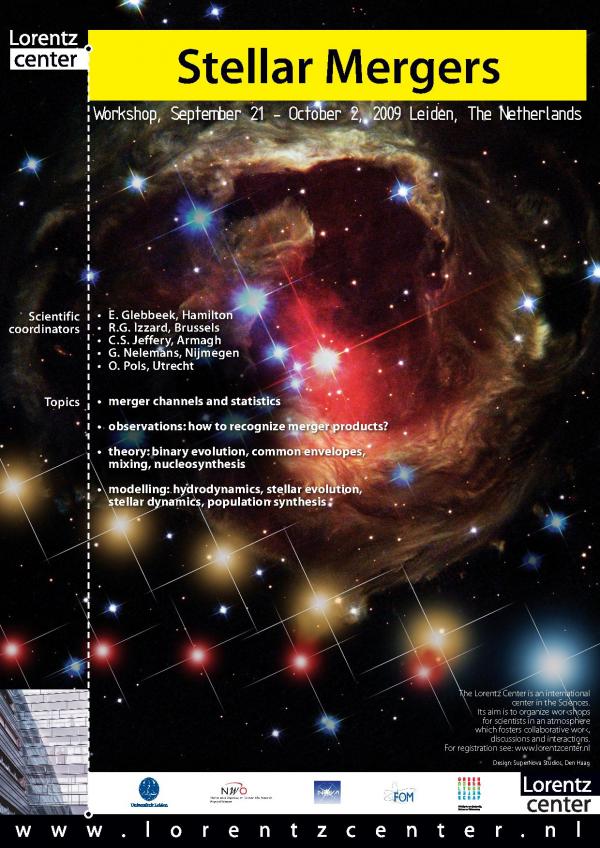