Symmetry as a Modern Scientific Concept Historical and Philosophical Perspectives

The modern scientific definition of symmetry is that of invariance under transformations. The concept of symmetry has proved remarkably fruitful in recent physical science. Symmetry provides a guide to ontology: the indiscernibility of elementary particles is a form of symmetry. It plays a role in delineating fundamental physical principles: every conservation law is associated with an invariance under a specific transformation. It constitutes a framework for modelling causal processes, by suggesting that effects must possess the symmetries of their causes. It serves as a heuristic principle in theory formulation: symmetry considerations suggest which physical situations must be treated as distinct and which as the same. The attendant notion of symmetry breaking has demonstrated a similar fruitfulness and range of applicability.

Recently, symmetry has come to play important roles in biological science too. The symmetries of plant morphology are regarded as a leading principle in ontogenesis. The bilateral symmetries of animals, and their assessment by potential mates, have been revealed as an important factor in sexual selection.

Symmetry also plays important roles in domains other than the sciences. In architecture, for example, symmetry is associated with order, balance, and seemliness. Symmetry principles are similarly prominent in other art forms, though perfect symmetries are frequently regarded in visual art as aesthetically sterile.

The aim of this interdisciplinary Lorentz Center workshop is to review conceptions of symmetry from four different perspectives. The following themes are intended to facilitate interactions across disciplines:

•        The Epistemological Status of Symmetry Principles in Physics

•        Symmetry and Symmetry Breaking in Morphogenesis

The opening day is devoted to exploring the general concepts of order and disorder to shed light on the tension between symmetry and asymmetry. On one reading, symmetry is understood as corresponding to a highly ordered state, which requires effort to achieve and maintain, whereas departures from symmetry are understood to correspond to disorder and lack of structure. The concepts of entropy and of the thermodynamic arrow of time encapsulate the idea that isolated systems in nature tend to decay from order to disorder, a conception to which Paul Ehrenfest, a physicist in Leiden, made a signal contribution. On a reading inspired by algorithmic information theory, by contrast, symmetrical states of affairs correspond with low information, whereas increasingly disordered or random outcomes have higher information content. This juxtaposition of perspectives yields some apparently paradoxical conclusions: for example, many physicists would hold that the discovery of a symmetry in phenomena shows nature to be highly structured, whereas one might conclude that such a discovery shows nature to be simpler and less richly structured than if the symmetry failed to hold. The same ambivalence pertains to the role of symmetry in aesthetic discourse: beauty is associated with symmetry in classical theories of art, but many modern onlookers would associate perfect symmetries with lifelessness and lack of aesthetic value. What do these conceptual relations tell us about the relations of order and symmetry?

The Epistemological Status of Symmetry Principles in Physics

Symmetry and Symmetry Breaking in Morphogenesis

In the final session we revisit two classic texts of the twentieth century: D’Arcy Thompson, On Growth and Form (1917) and Hermann Weyl, Symmetry (1952). Both Thompson and Weyl present mathematical theories of transformations and invariances that are intended as overarching organizing principles in their different domains. In pursuing this goal the two authors offer historical accounts of the concepts at stake. However, while Weyl’s work has remained central to and acknowledged in theoretical physics and science in general, Thompson’s approach largely fell out of fashion in the “modern synthesis” of evolutionary theory, regaining importance only with the rise of evo-devo. What general conclusions can be drawn within a historical framework about the role of theories of transformations, invariances, and symmetries in different branches of science? 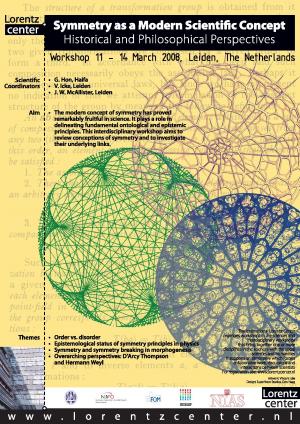 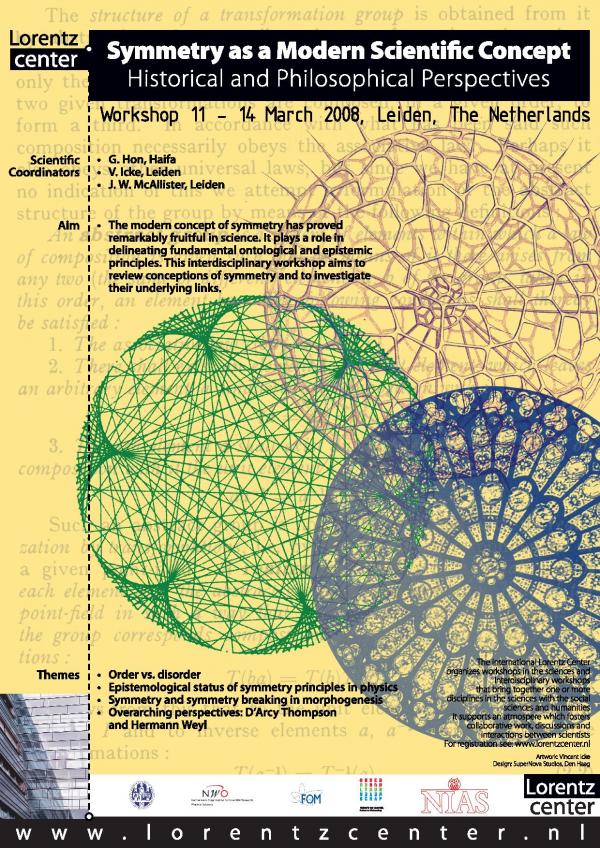