The Antikythera Mechanism: Science and Innovation in the Ancient World

One of the most sophisticated scientific instruments of the ancient world is an astronomical computer of perplexing complexity, known as the Antikythera Mechanism. It is a testimony of the awe-inspiring and surprisingly advanced astronomical and technological knowledge and skills of the Hellenistic and Roman world. This astronomical computer from the second century B.C. had the ability to describe and predict celestial phenomena, as its gear trains represent the full translation of even the most sophisticated aspects of astronomical knowledge available in these centuries. It is the apex of technological knowledge and innovation from Ancient Greek world as we know it, and for more than 1300 years the world did not know a machine as sophisticated. Still, the social and technological context of the mechanism remains a mystery, and as yet no predecessor, equal, or descendant of the device is known.

Motivation and aim of the workshop

The aim of this workshop is to promote a cross-disciplinary dialogue between classicists, astronomers, archaeologists, mathematicians, and historians on the subject of science and innovation in antiquity around a common theme: the Antikythera Mechanism. Our aim is to place the mechanism, and ancient science in general, explicitly in their wider cultural, literary, and scientific context. We explicitly invite scholars working on classical literature, archaeology, and ancient history who have an interest in the role of astronomy, other sciences (and pseudo-science), or education and the transfer of knowledge in the ancient world.

We invite contributions on a variety of topics, including: ’The origins of ancient astronomy in Babylon’, ’The transfer of scientific knowledge in the Hellenistic period’, ’The uses of astronomy and science in education, art and literature’, ’The application, transfer and innovation of technology’, and ’The role of Alexandra and Rhodes as the centres of science and culture’. There will be specialised panels on ’The gear-train analysis’, ’The interpretation of the inscriptions found on the mechanism’, and ’Modern reconstructions of the Antikythera Mechanism’. We also want to organise sessions on underwater archaeology and the excavations of the Antikythera wreck, as well as an outreach session on ancient scientific and technological heritage. We are open to proposals on other related topics.

The workshop intends to offer contributions from specialists in the sciences and the humanities that reflect and contribute to the state of the art in each field, but that are at the same time accessible to specialists in other fields.

This workshop is the initiative of Niels Bos, who is currently preparing a PhD on the Antikythera Mechanism in the Kapteyn Astronomical Institute, and in the Faculty of Arts at the University of Groningen. It is supported by Rien van de Weygaert (professor of astronomy at Groningen), Alexander Jones (professor of the history of the exact sciences in Antiquity, at the Institute for the Study of the Ancient World, New York University), Mike Edmunds (Emeritus professor and Principal Investigator of the Antikythera Mechanism Research Project) and Onno van Nijf (professor of ancient history at Groningen). 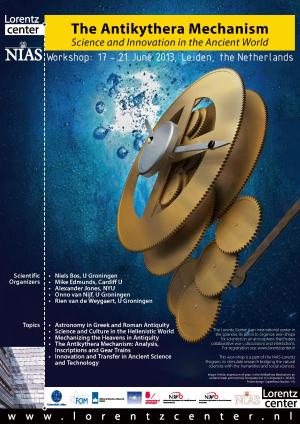 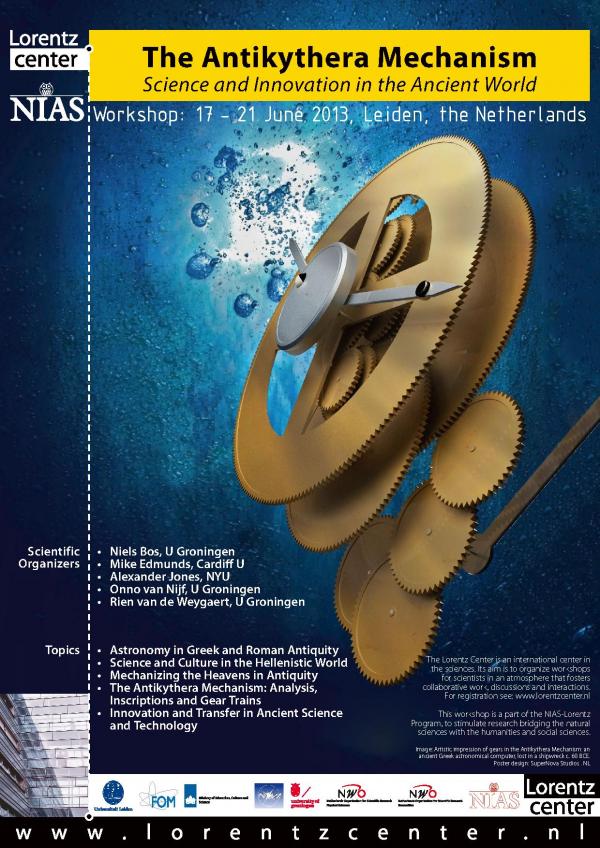