The first Science with LOFAR surveys

Description and Aim: the first science with LOFAR surveys

LOFAR, the Low Frequency Array, is a next-generation radio telescope that is being built in the Netherlands and neighboring countries and will be fully operational at the end of this decade.

Its superb sensitivity, high angular resolution, large field of view and flexible spectroscopic capabilities will represent a dramatic improvement over previous facilities at these wavelengths. As such, LOFAR will carry out a broad range of fundamental astrophysical studies and will be an important vehicle for astronomical research.

An important goal that has driven the development of LOFAR since its inception is to explore the low-frequency radio sky by means of a series of unique surveys. We are planning to exploit the unprecedented sensitivity and wide instantaneous field of view of LOFAR to conduct large-sky surveys at 15, 30, 60, 120 and 200 MHz. Four topics are driving the definition of the proposed surveys.

These four topics are:

·         Star formation processes in the early Universe using starburst galaxies as probes, and

Besides their impact on these main drivers, LOFAR surveys will contribute substantially to our understanding a broad range of additional astrophysical topics.

·         Physics of radio sources, their end-stages and their environments using giant radio sources as probes,

·         Magnetic fields and the interstellar medium in nearby galaxies,

·         Large scale structure of the Universe and its evolution, using clustering of radio sources, baryonic oscillations and gravitational lensing as probes,

In 2009 at least 20 of the currently planned 36 Dutch LOFAR stations should be operational. Also a number of experiments with the first European station in Bonn will have been carried out. Results from these experiments will be crucial input for the planning of the scientific surveys to be carried out not only with the ‘Dutch’ LOFAR, but also with the European LOFAR foreseen to have at least about 10 stations in Europe. The workshop at the Lorentz center to be held December 10-12, 2008 will focus on:

On the first day overview talks will be given on the status of LOFAR and the main scientific drivers. These presentations will be open to the community. For the remainder of the workshop, presentations will take about 50 % of the time so that there is ample time for discussions. In addition, we will set aside 25 % of the time so that the working groups on the various science topics can meet and plan their work. 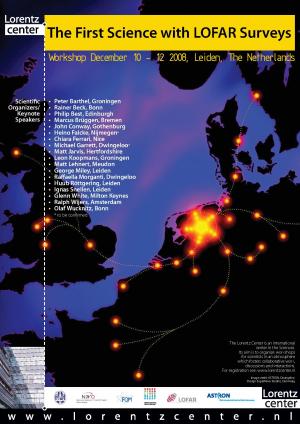 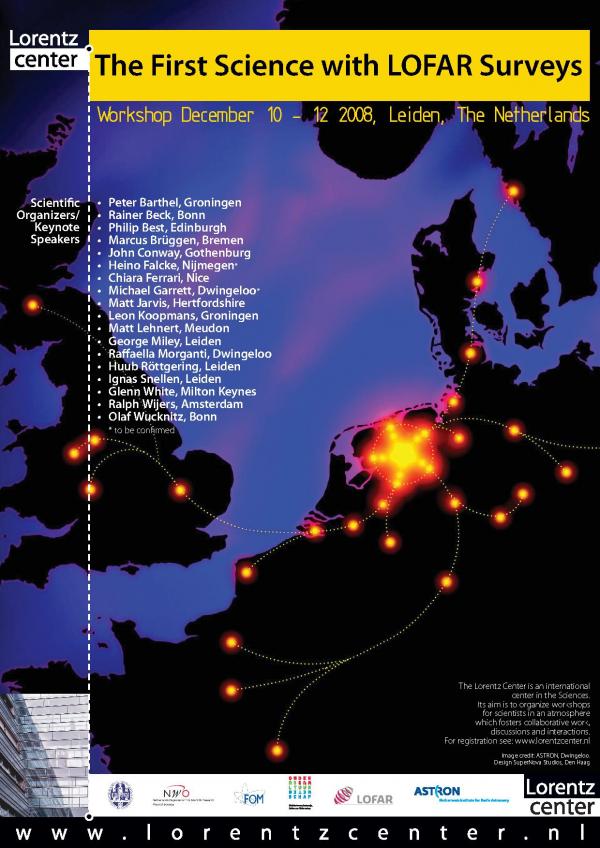