The aim of this workshop is to bring together researchers from the humanities, social sciences and exact sciences to explore the possibilities of connecting the various strands of research on lying and verbal deception. This will contribute to a comprehensive account of these phenomena from the perspectives of linguistics, logic, psychology, computer science, artificial intelligence, cognitive science and biology.

Lying is an everyday phenomenon that is central to social interaction. For most people, lying and being lied to are common experiences that may involve white lies to spare someone else’s feelings, small dishonesties (for example, on a social network site) to improve one’s self-presentation, but also blatant falsities for financial or other profit. Most acts of lying are verbal in nature. From this point of view, it is surprising that very few linguistic analyses exist of lying. Until recently, lying has mainly been approached from a philosophical, logical or psychological perspective, addressing specific aspects of the phenomenon of lying, such as the moral aspects of lying, the proper definition of lying, or the behavioral clues for detecting lies. More recently, researchers have also started to explore psychophysiological measures for detecting deception, which could have a practical use in lie detection tests. Furthermore, lying has become a topic in human-computer interaction, due to the aim to develop applications with more realistic artificial agents.

A comprehensive account of lying requires an interdisciplinary approach. The speaker must not only determine how to phrase the lie, but must also estimate how the listener will understand the utterance, compute the change in beliefs brought about by the lie, remember past lies while planning future utterances in order to avoid contradictory statements, and possess the cognitive abilities to carry out these computations. Likewise, the listener must use a variety of cues and will need to estimate how likely it is for the speaker to lie in the specific situation, in order to detect the lie. The various aspects involved in the act of lying, that are studied in diverse research fields and using different methods and formalisms, such as logical analysis, computational modeling, behavioral or psychophysiological experiments, and linguistic or discourse analysis, are most likely connected. However, due to the different questions being asked in the various research fields, the different assumptions entertained, and the different methods used, revealing the connections between the different approaches is challenging.

Developing a comprehensive account of lying would not only extend the scope of the separate disciplines, but would also contribute to a more complete picture of human cognition, its capabilities and its limitations. If lying is indeed theory of mind in action, as has been claimed, we expect to see this action reflected at all levels of analysis of the phenomenon of lying. For example, we then expect the grammatical choices made by the speaker to depend on his or her estimation of the interpretation by the listener, we expect epistemic reasoning to be bounded by cognitive limitations, and we also expect to see a relation between the features of linguistic style that have been argued to be indicative of deception and the aspects of language that have been found to be affected in groups with impaired theory of mind abilities, such as individuals with autism.

Developing a comprehensive account of lying would also benefit the exact sciences, technology and society at large, as understanding lying and verbal deception in humans is essential for human-computer interaction, for example by making a virtual training environment more realistic in areas such as safety and security, education, digital games and health care.

The workshop will be highly interactive, with individual presentations as well as ample time for interdisciplinary discussions and cooperative research. The five themes of the workshop are (i) the production of lies, (ii) the detection of lies, (iii) costs and benefits of lying, (iv) individual and cultural differences in deception, and (v) the prevention of lying. 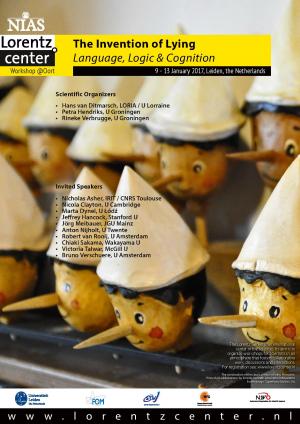 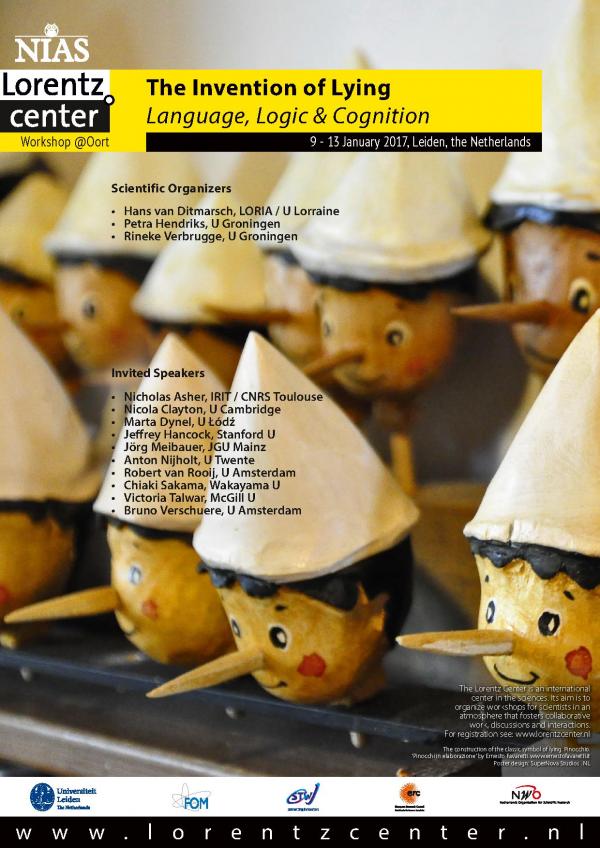