The physics of genome folding and function

This workshop aims to create the theoretical basis for analyzing and understanding (i) the folding of the genome in the nucleus or nucleoid of living cells, and (ii) the role of genome folding in the regulation of gene expression and other genome functions. To achieve this goal we bring together biologists and theoretical and polymer physicists. Results of the workshop will be published in one or more (review) papers in peer reviewed journals. It is foreseen that the ideas developed during this workshop will result in collaborative research projects.

a.         The orchestration of gene expression

Genomes contain up to tens of thousands of genes. Living organisms face the challenge of coordinating the expression of their many genes during development, cell differentiation and changing environmental conditions. Three hierarchical regulatory levels orchestrate gene expression in probably all organisms.

(i)         The level of the individual gene via the binding of transcription factors to regulatory sequences (promoters, enhancers) near the gene.

(ii)        The level at which individual genes or gene clusters are switched to an off state or a ‘permissive’ state (allowing regulation at the level of the individual gene), in a way that this state is stably transmitted to the daughter cells during cell division. In eukaryotes this is called epigenetic regulation. Similar switching can be found in eubacteria, e.g. the lysogenic state of the lambda phase in E.coli.

(iii)       The level of the dynamic folding of the long genome molecule(s) (DNA or chromatin fiber) inside the confined space of the nucleus (eukaryotes) or nucleoid (prokaryotes).

The first two levels are being studied intensively and molecular mechanisms are presently unraveled. Despite its key role, we know remarkably little about the third level of gene control.

This workshop intends to create a theoretical basis, i.e. models based on first principles, that allows understanding of the dynamic folding in nuclei or nucleoids.

b.         Dynamic genome folding is instrumental in gene regulation

In all organisms the DNA molecule is packaged by proteins, so that it fits inside the volume of a nucleus (eukaryotes) or nucleoid (eubacteria). In all eubacteria and several Archaea this is done by a set of mostly small proteins that bind to DNA with low sequence specificity, resulting in bending, wrapping and bundling of the DNA fiber. In all eukaryotes and some Archaea DNA is packaged by wrapping it around histone protein octamers, forming nucleosomes, which together form the chromatin fiber. This fiber is subsequently bended, bundled and otherwise folded to fit inside the cell nucleus. There are good reasons to believe that the basic principles of genome folding in eubacteria, Archaea and eukaryotes are similar, despite the different types of proteins that are involved.

The packaging of the DNA or chromatin fiber inside the nucleoid or cell nucleus is a formidable task. For instance, in mammalian cells 2 m DNA molecule must be packaged inside a cell nucleus with a diameter of about 10-5 m (this is equivalent to 20 km of thin wire in a tennis ball. At this scale the average size of a gene is about 1 cm on the wire). Regardless of the strong folding, the DNA must be accessible for the molecular machineries that carry out transcription, replication and DNA repair. Moreover, controlled changes in local genome folding are a key element in gene orchestration (level 3 gene control). Obviously, this puts severe constrains to the way genomes can be folded.

The folding of the chromatin fiber in relation to the transcriptional activity of the genome has been documented extensively, mainly by light microscopy and biochemical approaches. It has shown for instance that in eukaryotes epigenetic switching to a permissive state (allowing gene regulation at the individual gene level) is accompanied by considerable local unfolding of the chromatin fiber. Vice versa, transcriptionally silenced parts of the eukaryotic genome are tightly packed. In eubacteria changes in gene activity are closely related to changes in local supercoiling. Many more observations have been made that relate genome activity to genome folding. It has been very difficult to interpret these data sets and to develop quantitative and predictive models that allow understanding of these data.

Understanding of gene regulation at the level of dynamic genome folding (control level 3) is crucial for understanding the functioning of the genetic system. This workshop will develop the novel concepts and approaches that are required.

A limited number of attempts have been made to develop models for genome folding on the basis of polymer physics and thermodynamic considerations, among other by the applicants. Neither a systematic analysis of the problem of dynamic genome folding has been carried out, nor have comprehensive and quantitative models been developed yet.

This workshop brings together theoretical physicists and polymer physicists with biologists that are interested in genome folding of eubacteria and eukaryotes. Together they will develop a theoretical framework for the analysis and understanding of the dynamic folding of genomes.

Structure of the workshop

This small workshop (about 30 attendees) will take four full days. It will consist of a small number of introductory lectures in the first part of the morning. After that the participants split up in about five working groups, each tackling a specific issue that is related to the introductory lecture. In the course of the afternoon the working groups gather and exchange views and ideas that they have developed so far. Based on these discussions the working groups have another about two hours to finish and wrap up their assignments. During the first day most of the time will be spend on getting an overview and consensus about the issues that will be addressed. In the subsequent days a number of specific issues will be addressed. The last day will be spent on developing an integrated view.

The daily program will approximately fit the following time schedule.

We are aiming for about 30 participants allowing us to form five small working groups of about five persons, each a mix of biologists and physicists. To ensure participation of young researchers, we will limit the number of senior investigators to maximally 15. 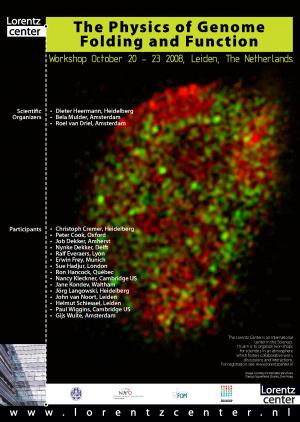 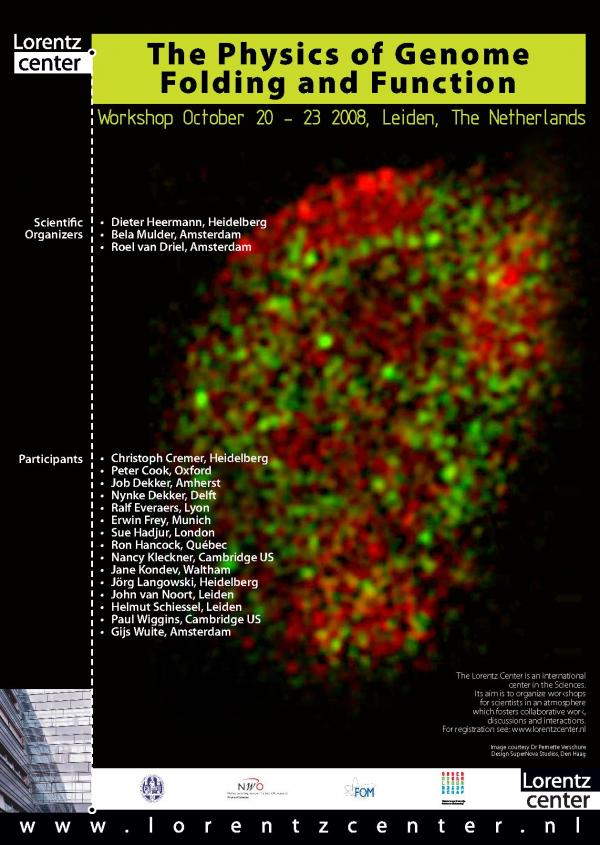