The Universal Problem of the Non-Universal IMF

The stellar initial mass function (IMF) describes the relative number of stars of different masses that are formed during a single star formation event. It is therefore a fundamental outcome of the star formation process, and one that must be reproduced by any successful theory of star formation. Stars are the primary luminous tracer of many astronomical systems, from star clusters to galaxy clusters. The IMF therefore has far-reaching implications to our understanding of the Universe, as our interpretation of the ensemble (or ‘integrated’) light from such systems will be governed by our knowledge of the IMF.

With few exceptions, in our own galaxy and in neighboring galaxies, the IMF appears well described by a universal functional form, over a substantial range in physical conditions (metallicity, star-formation rate, etc). In recent years, however, a number of studies have called the universality of the IMF into question. A notable and high-profile example is the case of the central regions of massive galaxies, which seem to exhibit an IMF substantially different from the canonical one. This trend has been suggested by three independent methods: spectroscopic signatures of dwarf vs. giant stars in unresolved populations, dynamical modelling of stellar kinematics, and strong gravitational lensing over galaxy scales.  These studies generally agree that the stellar populations in the cores of high-mass early-type galaxies are ‘too heavy’ for a Milky Way IMF, with the spectroscopic studies implicating an excess of low-mass stars as the origin of this extra mass.

This apparent concordance has been challenged through inter-comparison of results different methods, and different implementations. In some cases, there is apparently strong tension between constraints obtained, e.g. from spectroscopic methods versus mass-to-light ratio measurements. The discordance might be due to over-simplified assumptions for the detailed form of the IMF variation, or to current limitations in stellar population models (e.g. accounting for non-solar abundance ratios), or to breakdowns in other common assumptions (e.g. IMF gradients). The arrival of new large datasets, and improved modelling methods and inputs, offers great hope for resolving these discrepancies in coming months and years.

This workshop will bring together key proponents of the main approaches to measuring the IMF (both within and beyond the Milky Way), to try to resolve the various disagreements and inconsistencies in current studies. The workshop will include experts from a range of disciplines, including star formation, stellar populations, stellar dynamics, and gravitational lensing, with the aim of exploring in detail the systematic uncertainties and gaps in our current approaches to this problem. We will also frame this topic in the broader context of galaxy evolution, by considering the distant ‘high-redshift’ Universe, and including theoreticians to understand how different IMFs impact the predicted properties of galaxies.

1.       Disseminate knowledge between participants about the key systematic uncertainties associated with the various approaches to IMF determination;

2.       Generate a set of agreed tests of IMF constraints from independent techniques, and form new collaborations to carry out these tests;

3.       Discuss and quantify specific implications of a non-universal IMF to galaxy formation and evolution studies in general;

4.       Summarize the range of views on the IMF expressed within the workshop, and communicate results and discussion to the broader astronomical community through online slides and notes. 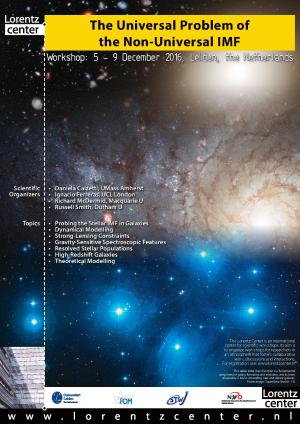 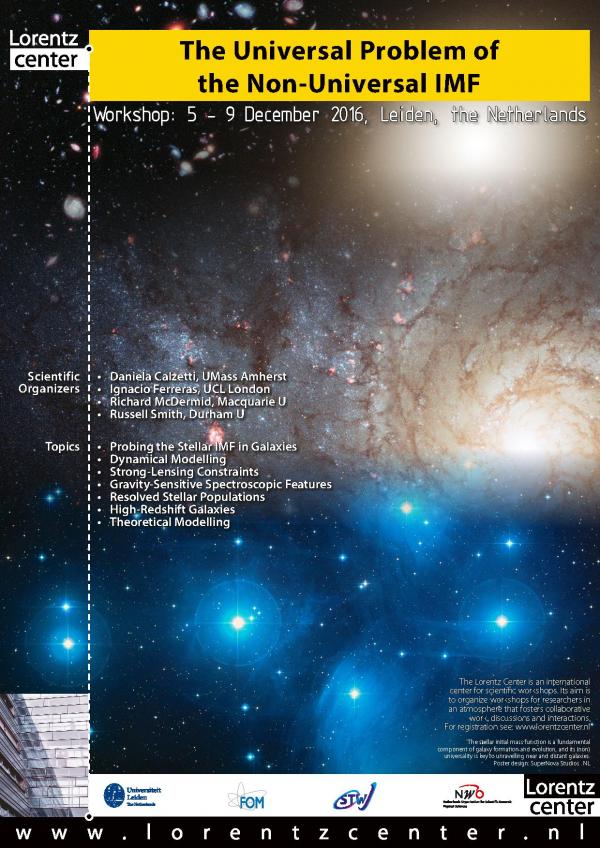