The World a Jigsaw: Tessellations in the Sciences

Tessellations, geometrical divisions of space, and in particular Voronoi and Delaunay tessellations have been established as essential concepts for modelling and analyzing a great many physical and biological as well as human systems.

The dual Voronoi and Delaunay tessellations form fundamental concepts in stochastic geometry and computational geometry. They represent the natural division of space defined by a random distribution of nuclei. Originally defined within the context of number theory and quadratic spaces, it was the rapid development of computers which opened new and immediate insight into the geometric patterns defined by tessellations through their visualization.

The basic and simple concept of Voronoi and Delaunay tessellations makes them into intuitively appealing constructs finding a widespread application in a large variety of applied sciences. The morphology of soap bubbles, the distribution of GSM network antennae, the shape of crystals, regions of influence of neolithic clans, and the large scale structure of the Universe are but a few of the subjects for which tessellations turned out to provide useful descriptions. Tessellations have gradually attained a role as an essential and elegant tool within many different branches of science - ranging from fields such as hydrodynamical simulations, solid state physics, geophysics, astrophysics, theoretical chemistry, astrophysics, biology, archaeology and statistical inference - and have attained an almost universal presence through 3D computer visualization purposes. Still, they do hold many surprises.

In the past few years the applications of tessellations have surged and expanded immensely. This has made it all the more apt and urgent to bring together a diverse company of scientists who have contributed to these many new applications. In the field of geophysics and astrophysics we have seen the use of tessellations for purposes of estimating and interpolating quantities throughout space, for developing moving-grid methods combining Eulerian and Lagrangian formalisms for describing the evolution of

physical systems, and for developing novel multi-object frameworks for radiative transfer processes. Developments in computational geometry have lead to the formulation of natural shape descriptions of nontrivial spatial patterns.

from the applied sciences regularly offer keys to new fundamental insights and results. A

telling example is that of the finding of the power-law two-point correlation function of Voronoi vertices in computer calculations which did lead to interesting new insights within stochastic geometry into the fundamental properties of tessellations. Hence, there is ground for a fertile feedback between the mathematical branches of stochastic geometry and computational geometry on the one side and the applied sciences on the

The interdisciplinary workshop  “The World a Jigsaw: Tessellations in the Sciences'' will

bring together internationally known experts from the fields of mathematics and computer science (stochastic geometry, computational geometry) dealing with tessellations as a topic of study as well as of various branches of science - ranging from cosmology, astrophysics, geophysics to biology and archaeology - in which the application of tessellations has lead to significant advances and new avenues of research.  Essential element of the workshop is the confrontation, interaction and synergy between the (recent) theoretical and fundamental developments on the analytical and computational aspects of tessellations with the wide range of applications in the sciences. It is expected that this interaction will lead to a better understanding of the subject, a more solid foundation of tessellation applications and considerable progress and new avenues of research. 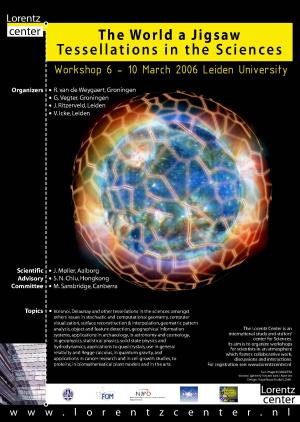 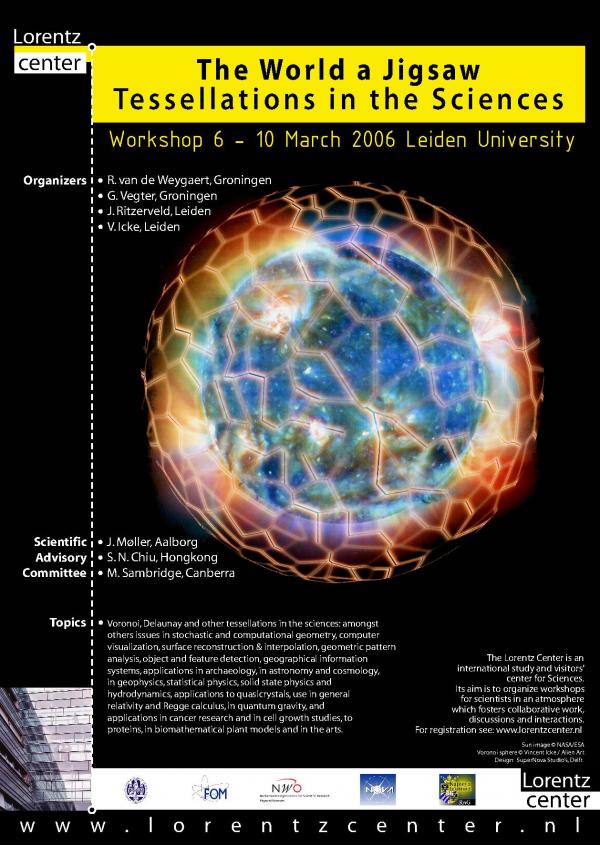