To Be Announced! Synthesis of Epistemic Protocols

'To be announced!': an announcement is a communicative action, publicly observable. Seeing that a light is on is an observation, or sensing action, also known as an epistemic action. Turning the light switch is a physical action, also known as an ontic action. In planning, various aspects can be called epistemic: the condition for executing an action may be knowledge or ignorance of agents, the actions themselves may have an epistemic aspect (they are executed by an agent, or announced, or the communicated information may be about knowledge or ignorance) and they may only be partially observable (so that the agent does not know which action has really been executed), and the goals of plans may be epistemic (the spy may not learn the secret). Plans with epistemic features are also, because of the epistemic aspect, called protocols. This workshop is on synthesis of epistemic protocols in the widest sense of the word.

with some or with full assurance that I am getting closer to the goal? Such problems become more complex if they involve more agents. The knowledge states of agents may be in terms of knowledge properties of other agents (I do not know if you know that I broke the teapot, so it makes sense for me to plan to replace it before you find out, in case you were not to know it). Such assumed knowledge properties may be incorrect (in fact you heard the teapot crash while in the next room), or the agents may act at unpredictable or unknown moments, or by way of possibly delayed or faulty communication channels, as typically in asynchronous systems.

Synthesis of epistemic protocols is related to planning in artificial intelligence. In artificial intelligence, the focus of planning is on heuristics. In AI terms, synthesis of protocols is epistemic planning, and a suitable logical setting is that of modal logic with PDL and epistemic operators. Useful standard notions in their AI setting are the notions of progression and regression of information state specifications (a.k.a. progression/regression of beliefs, or belief states). If you execute an action in an information state satisfying a given initial specification (formula),

then the formula such that any resulting next information state satisfies it, is the progression of the initial specification. Regression is defined analogously, in the other direction.

Synthesis of protocols in dynamic epistemic logic has only recently been investigated. Dynamic epistemic logics are modal logics with modal operators for knowledge, and also dynamic modal operators of a rather particular kind, namely wherein the information state transition is already encoded in the operator. A well-known such dynamic operator is 'public announcement'. In that case, the current information state is restricted to the submodel satisfying the announcement formula. Topics in the current interest of the dynamic epistemic planning research community include the analysis and synthesis of epistemic protocols for certain dedicated applications,

The workshop 'To be announced!' is focussed around five themes involving epistemic planning:

The keynote invitees for the workshop 'To be announced!" are

Typical works in the area of epistemic planning by these authors will later be added to the webpage. 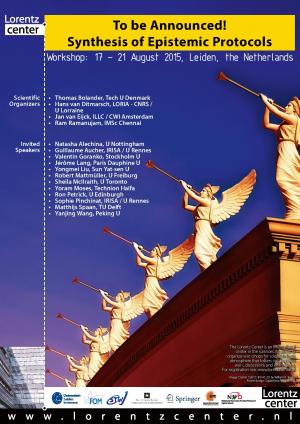 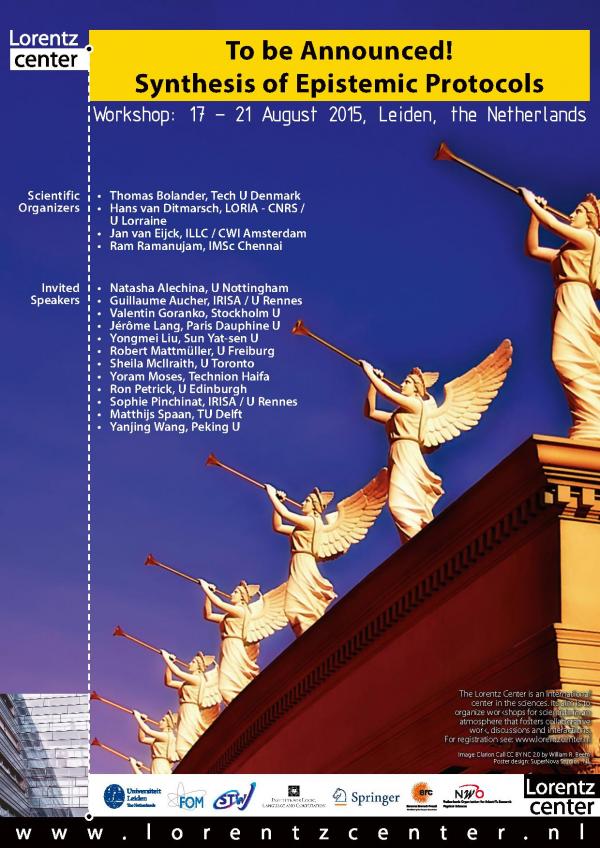