This workshop brings together natural scientists, social scientists and philosophers to discuss how uncertainties in science can best be communicated both among scientists and to public decision-makers. The main aim for the workshop is to review existing Uncertainty Guidances for treating uncertainties in science and public policy, leading to a new Uncertainty Guidance.

How should the reliability of scientific findings be assessed and communicated? How can ‘deep uncertainty’ be talked about? What value do probabilistic estimates have in public decision-making? These questions point to the need for uncertainty guidances in science and public policy. A paradigmatic example that will feature prominently, but by no means exclusively, is uncertainty in climate modeling. This example will be contrasted to weather prediction and examples from other physical sciences, but also to examples from the social domain.

In several policy domains that seek to be informed by science different approaches have emerged to guide analysts and decision-makers in dealing with uncertainty. For instance, the CIA has an uncertainty guidance, which helps those involved in processing intelligence information and those making future scenarios for all kinds of impactful surprises for society think through and communicate about, often weak, evidence in a structured manner. How can democracies best deal with uncertainty arising from multidisciplinary science and associated policy support systems?

What was done with this topic in the domain of assessing climate change knowledge? In the UN’s Intergovernmental Panel on Climate Change (IPCC) there has been increased attention on dealing with uncertainty over the last two decades or so, resulting in a series of “Uncertainty Guidances” for the treatment of uncertainties in its Assessment Reports. It remains questionable, however, whether this increased attention has led to a sufficient understanding, characterization and communication of uncertainty in model-based findings shared with decision-makers. It is actually found that the uncertainty guidances did often not make things easier to understand; while these guidances have been good for opening up discussion, more consideration is needed on what they can and should accomplish. 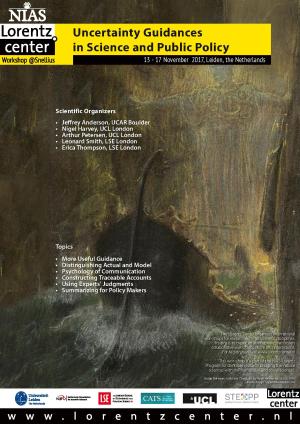