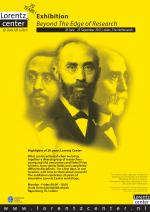 2009
The workshop program reaches the practical, physical limit for (mostly) 5 day workshops in one venue. Lorentz Center is well known in the original research areas, with more than 2000 workshop participants from all over the world – 40% Dutch and 40% from other European countries. Plans for a second venue begin to take form. Arjen Doelman becomes the third director of the Lorentz Center.

2014
The Lorentz Center sets up special collaborations in the computational sciences, with joint annual workshops with CECAM (Centre Européen de Calcul Atomique et Moléculaire) in Lausanne and with the Netherlands e-Science Center in Amsterdam.

2020
While starting the year positively with a new, user-friendly website, it soon turned into a far from normal year due to the Covid-19 pandemic that affected the whole world. For the Lorentz Center this meant an unexpected switch from face-to-face meetings to online workshops. An intense period, but also a phase where we were able to show our flexibility and our determination to keep on bringing researchers together in the 'Lorentz Center way'.

2022
The Lorentz Center is celebrating its 25th anniversary. Despite still being tied to the Covid-19 restrictions, scientists from all over the world come together again at the Lorentz Center, virtually or in person.